Home › Cruise › Charity Begins On Board

Charity Begins On Board 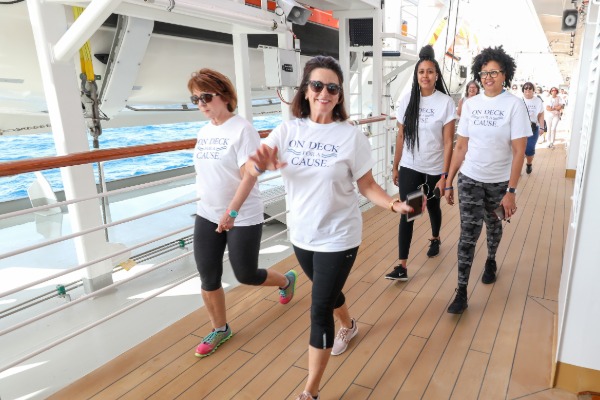 In recognition of World Cancer Day, Holland America Line (HAL) announced that it reached $6.5 million raised for cancer support through On Deck programming.

Holland America began the program in 2006, and to-date nearly half a million guests have participated in the walks.

Currently, On Deck for a Cause benefits five international cancer organizations in Canada, the US, Australia, the Netherlands and United Kingdom.

Orlando Ashford, Holland America Line’s president, said, “On Deck has been at the heart of our giving program for nearly 15 years, and it’s incredible that we’re able to continue reaching new milestones each year, like $6.5 million thanks to the generosity of our guests and crew.”

Ashford continued, “We know that travel has the power to open minds, change perceptions and build deeper connections; and we also believe that coming together for a common cause helps inspire a sense of shared humanity. Cancer knows no borders and touches people’s lives around the world. We look forward to the day when World Cancer Day is held in celebration of a cure.”

Since its inception, nearly half a million participants have joined in more than 8,300 walks aboard Holland America Line cruises. Guests of all ages are invited to donate $20 to the Holland America Line Foundation, and on a day at sea participants join in a 5K non-competitive walk around the ship’s decks. Guests may walk less or not at all, as they prefer. Participants receive an On Deck for a Cause T-shirt, wristband and a reception following the walk. Depending on the ship, the distance to reach 5K ranges from nine to 12 laps.

In 2020 more than 500 On Deck for a Cause events will be held across the Holland America fleet, with walks taking place globally on cruises to the Mediterranean, Europe, the Caribbean, the South Pacific, Alaska, Canada and New England, Mexico, Asia, the Baltic, the Panama Canal, Australia, New Zealand, Antarctica and South America.

Soon it will be easier for guests to plan ahead and register online for the On Deck for a Cause walk prior to sailing as part of the online check-in process.