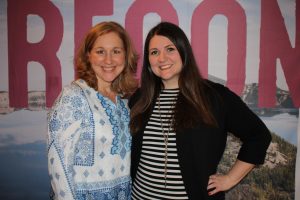 Portland, urban wineries and all things Oregon were in the spotlight last night (April 12) as Oregon tourism officials held an industry event in Toronto.

Partnered with Air Canada, which will once again begin seasonal flights from Toronto to Portland in May, attendees were treated to a trade show and dinner, paired with Oregon wines.

While Portland is known as the craft brewery capital of the world, the city also boasts numerous urban wineries. The state itself has in the neighbourhood of 545 wineries and 300 tasting rooms. Last year, Wine Enthusiast named Oregon as “Wine Region of the Year.”

On the cuisine front, new and trending in Portland is Pine Street Market, a food hall in the city’s Old Town district. It features an open floor plan with communal seating and nine restaurants led by some of the city’s top chefs.

Lisa Itel told PressToday that despite 2016 being a challenging year for tourism in the US, Oregon visitor numbers held their own, with the Canadian market remaining an important sector. Helping attract Canadians last spring was an “at par” campaign, which Itel says is forthcoming again this year. Another incentive for travellers is the state’s tax-free shopping.

And getting to Oregon remains easy, with Air Canada offering numerous flights from Vancouver, Calgary and Toronto.

Pictured above at the Toronto event are Itel (l) and Heather Anderson of Travel Portland. Below, Oregon wine maker Kate Norris (l) and Lynette Morus of Phelps Creek Vineyards in Oregon. 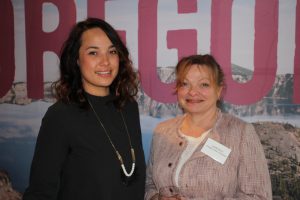