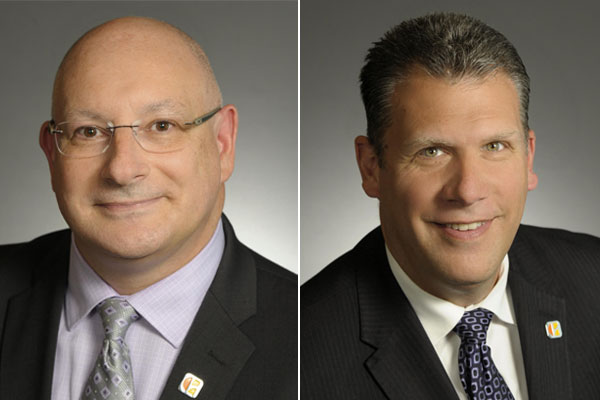 It’s a busy season for the team at Choice Hotels Canada, with a number of staffing changes, including retirements, role transitions and new hires.

All of the action is taking place within the franchise development and franchise services teams, starting with the upcoming retirement of hospitality industry veterans, Marc St-Gelais and Ian Sharp.

Both St-Gelais and Sharp have been with Choice Canada for many years, 21 and 10, respectively, helping to shape the company and drive its success. With their upcoming departures, the roles will be filled internally, with Juan Duran moving into Sharp’s role as director, Franchise Development for Western Canada. Currently, Duran is director of Membership Development for Ascend Hotel Collection.

In addition, two new Franchise Performance Consultants will join the franchise services team. Cyril Russell (pictured, top left) will take over Normand’s portfolio in Atlantic Canada. Based in Halifax with close to two decades in the hotel industry, Russell has a wealth of experience in property management and hotel operations. He most recently served as the Area General Manager for a group of SilverBirch properties.

Assuming Alldred’s portfolio of hotels in Ontario is Michael Durante (pictured, top right) of Niagara Falls. Most recently, he was the director of Operations/Rooms at the Omni King Edward Hotel in Toronto.

Durante has an extensive hospitality background and previously worked at a number of Choice properties. With more than 20 years in the industry, he earlier served as a general manager and operations manager for the Silver Hotel Group.