Time For Some Festive Fun In The Big Apple 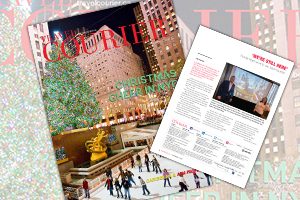 The season of Christmas peace in New York City seems to have added significance this year, as the city recovers from a terrorist attack with the holiday season just around the corner, reports western editor, Ted Davis in this week’s digital edition of Travel Courier.

Good cheer awaits in all the well known places, including Rockefeller Center, where the giant Christmas tree — probably the world’s most famous — holds court.

The tree rose in the plaza of Rockefeller Center on Nov. 29, when its 50,000 lights were turned on for the first time. It is then lit every night through the Christmas season until Jan. 7.

This year’s Norway Spruce stands at 23 metres in height and weighs around 11 tonnes. It was cut down in the town of State College, Pennsylvania and is topped by a Swarovski star.

The Rockefeller Center Christmas tree tradition has been enacted for over eight decades, starting in 1933.

It helped see New Yorkers through hard times like the Great Depression and the 9/11 attacks, when the tree was lit in patriotic red, white and blue.

Over half a million people will pass by the Rockefeller Center Christmas tree each day.

For the full story, check out this week’s cover story in the digital edition of Travel Courier.