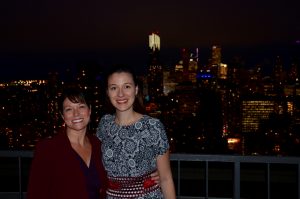 From the impending opening of Club Med Grand Massif Samoëns Morillon ski resort in France to the rugged cliffs on the island of Sicily, where Club Med Cefalu is slated to open next summer, and beyond, Club Med Canada provided agents with an overview of what’s to come at an annual seasonal launch event in Toronto last night (Nov. 1).

Carolyne Doyon, senior vice-president, Club Med Canada and Mexico, says the Canadian market is performing extremely well with an 11% increase for 2017, plus a double-digit increase noted in Ontario, along with a 30% growth in ski packages in the province.

“Winter 2018 — I don’t know if you are aware, but we’re already well into next winter — is proving also to be very dynamic, with already twice the volume growth to date,” she says. “The bar is every year higher and higher, but the entire team and myself, are confident that we will rise to the challenge together with your talent, your commitment and of course, a little bit of new features from Club Med.”

During the evening Club Med Canada also gave away a seven-night stay for two adults and announced the recent appointment of a new Toronto-based BDM, Janet Martin, who is responsible for Ontario, British Columbia and Alberta.

Later today at a press conference (complete with a live stream) the company will reveal details about the launch of a Club Med resort project in Le Massif de Charlevoix, which will mark the first Club Med in Canada.

Stay tuned for more on Club Med and the developments in an upcoming edition of Canadian Travel Press.

Pictured atop the 51st floor at The One Eighty overlooking Toronto are Doyon and Amélie Brouhard, marketing and communication director, Club Med Canada.