Operator Ready For The Next 100 Years 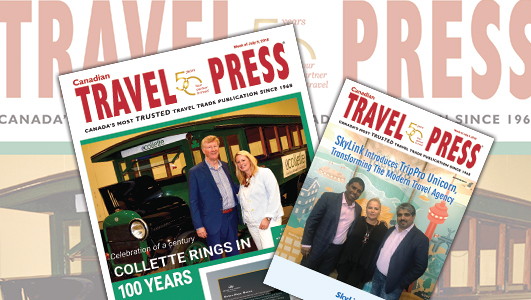 Although Collette is headquartered in Rhode Island, a lesser known fact about the tour operator is its founder had Canadian roots, reports assistant editor, Ann Ruppenstein in this week’s digital edition of Canadian Travel Press.

“Jack Collette was Canadian, from the Eastern Townships near Montreal,” Dan Sullivan Jr., Collette’s CEO tells Canadian Travel Press. “When we started doing tours, after World War 1, a lot of the tours went to Canada – to Montreal, Quebec, Niagara Falls, and The Maritimes.”

Back in 1918, the company’s first-ever voyage was a three-week long jitney adventure from Boston, Massachusetts to Florida for US$68.50. Today, 100 years later, Collette offers over 170 tours in 58 countries across all seven continents, and rather than a jitney, guests receive chauffeur service to and from the airport in luxury sedans.

“The story of Collette, to go 100 years, is a story of innovation, evolution, change, and that’s what we plan to continue doing for the next 100 years or beyond,” he says. “Jack had an idea and he ran that tour group, but it wasn’t a simple idea, it wasn’t a jitney, it was about taking people, sharing a ride to take a trip to explore… The jitney was just the means to take you there.”

To ring in its 100th anniversary, Collette recently gathered industry personnel from around the globe in Providence, RI, for a Future of Travel Global Forum featuring panel discussions and keynote speakers, along with a gala looking back on its evolution over the past century.