Home › Destinations › Come What May, Ireland Is Ready For 2019

Come What May, Ireland Is Ready For 2019 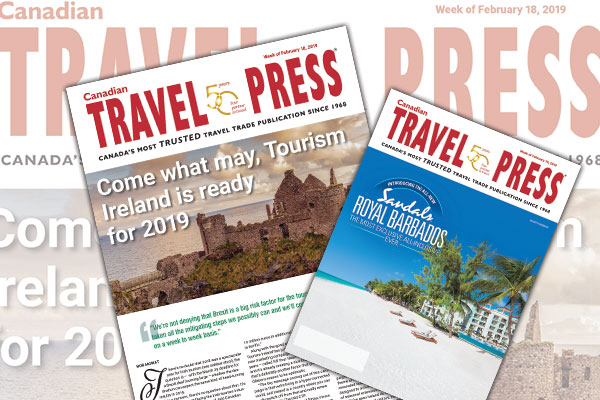 There’s no doubt that 2018 was a spectacular year for Irish tourism, the question is – with the March 29 deadline for a Brexit deal looming large – whether the destination can expect the same kind of head-turning results in 2019, writes executive editor, Bob Mowat in this week’s issue of Canadian Travel Press.

“Brexit is a concern, there’s no question about that. It’s probably the biggest concern facing the Irish tourism industry,” Niall Gibbons, CEO of Tourism Ireland, said during a recent visit to Toronto.

But he was quick to add: “I’m always optimistic. I have to be, we’re in tourism. We are looking to grow spend this year by 6%. That’s a really challenging figure, but I think we’ve got a very good strategy in place and I think we’re off to a good start to the year.”

To further help things keep ticking along, he noted that the Irish government has given the tourist board an additional 10 million Euros in additional funding “which is terrific.”

Along with the good start and extra funds, Tourism Ireland has just launched a brand, new marketing campaign – the first in seven years – called Fill Your Heart With Ireland and it’s already creating a nice buzz. And that’s definitely another factor that gives Gibbons reason to be optimistic.

“The key message coming out of this campaign is that we’re living in a hyper-connected world and Ireland is a country where you can really switch off from that and really renew your lust for life,” he told CTP.

Fill Your Heart with Ireland ( https://www.youtube.com/watch?v=1dAkMZjxv9A ) features a Swedish couple – they’re real people, not actors – who are equipped with a helmet camera that’s linked to a heart-activated monitor that reveals their “passion points” as they travel around Ireland.”