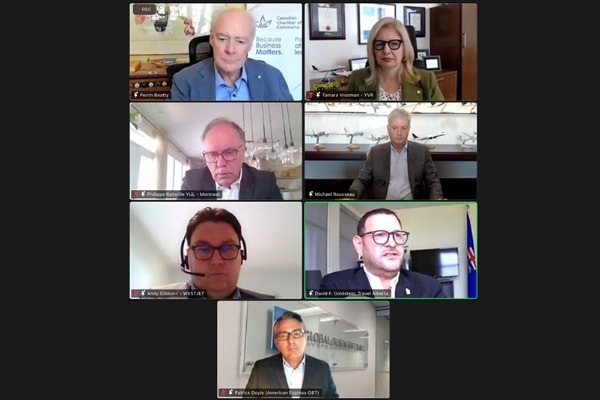 Aviation and business leaders are making it clear that without a strong federal commitment to a comprehensive aviation recovery plan, both the air sector and Canada’s overall competitiveness face considerable risk.

During a late May forum that looked at post-COVID air connectivity and passenger costs, participants emphasized the importance of the air transportation industry in this country, facilitating, as it does, the movement of people and cargo, and is a catalyst for other industries such as tourism.

Findings of a newly released whitepaper, Holding Pattern: Canada Needs a Swift Recovery and Competitive Air Sector, produced for the Canadian Airports Council, were part of the discussion.

The new whitepaper examined the issues that will affect air recovery in Canada, including increased costs to travellers and reduced connectivity. The paper noted that a 25% increase in the price of travel would lead to decline of 20% in passenger demand. In turn this will impact connectivity, which has plummeted by as much as 90% in some regions, while leaving other regions isolated with effectively no service at all.

Joyce Carter, CAC Chair and President and CEO of Halifax International Airport Authority, said: “Passenger throughput at Canada’s airports sits currently at roughly 10 percent of the levels seen in 2019. Until the lost connectivity is restored, many regions will not see the economic benefits associated with air travel – including the spin-off benefits for other industries.”

The cost of maintaining community access with almost no revenue has forced Canada’s airports into a deep financial hole that the government has yet to fully address.

COVID-19 travel restrictions have already led to airport losses of $5.5 billion in revenue to the end of this year. On top of that, airports have accumulated an additional $2.8 billion in new debt directly related to operating during the pandemic. This new debt, and its carrying costs, will have to be repaid, piling on additional costs on the price of air travel.

According to the whitepaper, the air sector’s current financial position and resulting cost-saving measures are likely to have an impact on the ability of Canadian airlines and airports to compete with their U.S. and foreign counterparts. This situation poses a real threat, as other major aviation countries are already on their way to recovery, while Canada’s borders have remained closed to international travelers since March 2020.

The forum also saw participants identify several actions that would reduce the risk that accessing flights or destinations would be more difficult or more expensive for that critical connectivity which will be required for passengers and cargo alike.

Bob Sartor, President and CEO of The Calgary Airport Authority summed things up, stating: “Aviation is the connective tissue that helps hold this huge country together and keeps our economy growing. Canadians need a dynamic and financially competitive aviation sector to reap the rewards which will come with a recovery.”

Industry Panelists (from l to r, beginning with the top row):