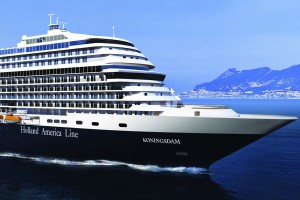 Holland America Line has debuted its fourth “Countdown to Koningsdam” video in the series that details the new ship’s staterooms and suites.

The short videos were created to provide updates and share the news ms Koningsdam nears delivery in April 2016.
Hosted by Johnathan Rogers, Koningsdam’s inaugural cruise director, the video, “Countdown to Koningsdam Episode 4,” features HAL’s Deputy Director of Interior Design My Nguyen, who takes guests inside the ship’s accommodations, including the new family and single staterooms debuting on board.

Koningsdam will boast more than 1,300 guest accommodations that received upgrades in both aesthetics and function. Four distinct colour schemes identify the suite, spa, verandah, ocean-view and inside categories. Guests will enjoy redesigned headboards with USB and electrical outlets on both sides of the bed, stone tops on desks and nightstands, more storage and improved lighting.

New to Holland America ships are Koningsdam’s 12 single ocean-view staterooms and 32 family staterooms, accommodating up to five guests each.

Video four can be viewed at http://bit.ly/1lZIefv. All videos as they are released are also available at cruiseimagelibrary.com/c/qyvq3wud.