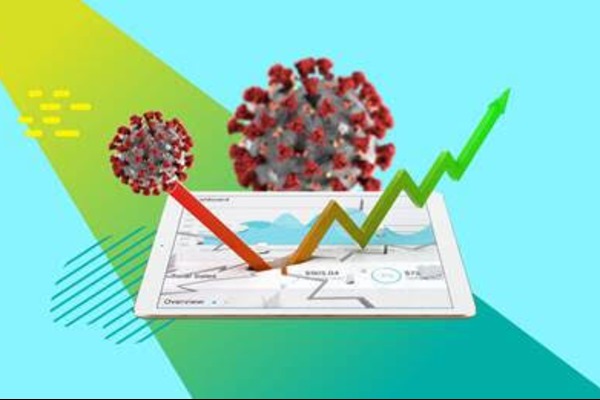 In a newly released study, trends data provider, SEMrush has analyzed the impact of COVID-19 on online behaviour to reveal that travel sectors and travel companies have been hit the hardest.

According to SEMrush data, Google search volumes for the major global airlines fell significantly between January and March 2020 as the outbreak spread and flights were grounded.

Branded searches within the overall industry average declined 16.2% from January to February, followed by an additional decrease of 6.7% between February and March.

The worst-hit overall were China Southern (down 78.4%), Bangkok Airways (down 72.4%) and China Eastern (down 67%), however Canadian airlines were also significantly affected.

SEMRush points out that traffic and search data for airlines do not correlate with financial data because millions of people spent hours on airline websites and hotlines changing their travel plans. 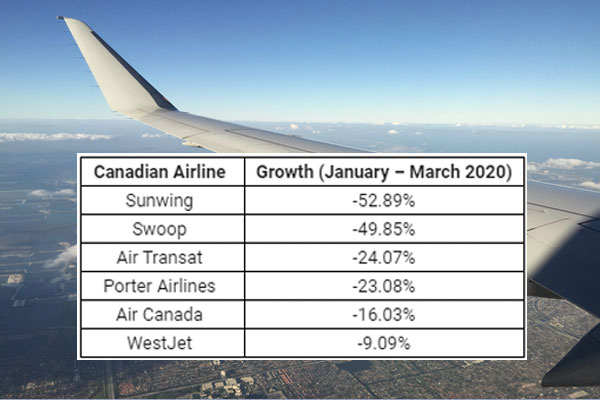 Airlines have certainly been active on social media during February and March, relaying updates on repatriation and policies.

The trend data company also conducted a Twitter sentiment analysis to see the public’s wider reaction to each global airline.

Whether due to strategic communications executed by each airline, or simply Canadian politeness, every single airline generated more positive than negative tweets about their brand. 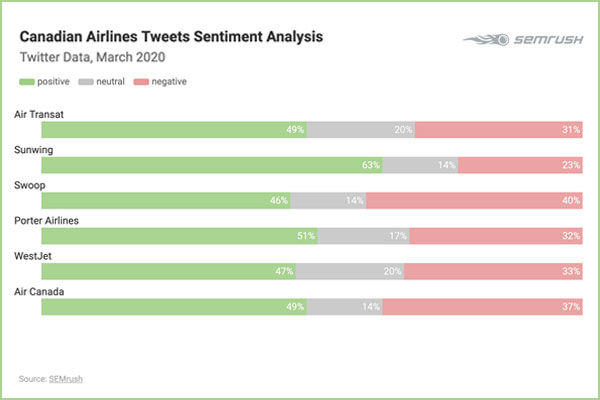 Swoop had the highest amount of tweets that used a negative tone (40%). Meanwhile, Sunwing saw the largest amount of tweets using positive language to describe the airline (63%), followed by Porter Airlines (51) and Air Canada and Air Transat (both 49% positive).

SEMrush also looked at the events industry, which has taken a major blow as a result of COVID-19, with conferences, music festivals, marathons, and major sporting events being shut down or postponed to a later date.

The company’s social media analysis identified which events and cancellations sparked major online debate and caused disappointment on Twitter globally. Dominating the discussions were sporting events; the next most talked about industry was music festivals. 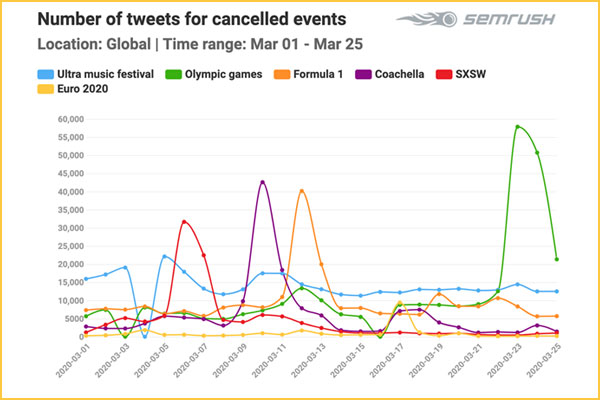 According to the research, Ultra Music Festival, SXSW, Coachella, and Formula 1, are all key events in 2020 that have resonated the most with online audiences. Both Ultra and SXSW are being vague about offering refunds to their attendees, which is causing topical debate online for music fans. It’s clear the discussion is a hot topic trending on social media as more than 2,000 tweets utilized the money emoji in association with Ultra.

Amongst other top used emojis, we saw the crying face emoji to most likely express disappointment due to cancellations and date changes.

As for hotels, branded Google search volumes for major global hotels fell by an average of 6.9% between January and February, falling another 26.76% from February to March.

SEMrush plans to do a follow up analysis in the 60 days to see if these behavioural trends are temporary, or if the behaviour of Canadians is changing more permanently as a result of COVID-19.

For more, go to https://www.semrush.com/blog/market-winners-losers-coronavirus/ .

Or check it out in this week’s Travel Courier by going to http://travelcourier.ca/a-look-at-the-impact-of-coronavirus-on-canadian-search-trends/