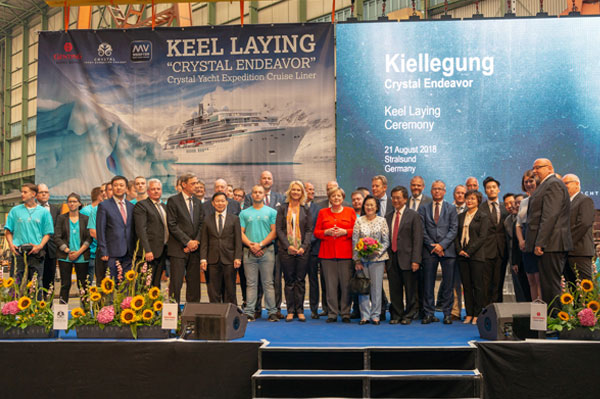 Crystal Yacht Expedition Cruises celebrated an important milestone in the construction of Crystal Endeavor yesterday (Aug. 21) as the keel was laid at MV WERFTEN’s Stralsund shipyard for the company’s first luxury expedition yacht.

Once the traditional lucky coins had been put into place, the 400-ton section was lowered on to the keel blocks.

“It is truly a thrill to mark this important milestone for Crystal Endeavor and the entire Crystal family, as this yacht will change the way guests can explore the world both adventurously and luxuriously,” said Wolber.

The 20,000 GRT yacht will be the world’s largest and most spacious purpose-built Polar Class ship. Crystal Endeavor will feature 100 suites and all the luxurious amenities and special touches for which Crystal is known.

Crystal Endeavor’s PC6 designation will enable it to operate in summer and autumn through medium first-year ice. The ship will feature the latest technology, including offshore dynamic positioning capabilities, offering both comfort and safety while exploring the icy waters in the Polar Regions and exotic locations across the globe.

Crystal unveiled the itineraries for Crystal Endeavor’s inaugural season on July 31, spanning from August of 2020 through January 2021, offering voyages of 12 to 22 days far off the beaten path of traditional cruise routes. Voyages rich with discovery will explore the cultural and bio-diversity of Japan and the Russian Far East; Indonesia, Borneo and the Philippines; New Zealand and Tasmania; Australia and the Great Barrier Reef; and Antarctica. The ship will sail a series of charters and special event voyages before it begins its inaugural season in August 2020.

Bookings for Crystal Endeavor are open.