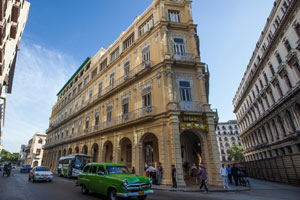 Both the UNWTO and the WTTC have condemned the Trump Administration decision to restore travel restrictions to Cuba.

The UNWTO’s secretary-general, Taleb Rifai said that it “represents a step backwards and [is] a strong attack on the freedom of travel.”

While David Scowsill, president & CEO of the WTTC, said that: “The Cuban people are directly benefiting from increased business and leisure travel to Havana. Travel brings income to the people who work in our industry. President Trump’s statements indicate that the Cuban people, rather than the government will be hit by this policy change.”

In his statement, Rifai pointed out that: “This decision will have limited impact on Cuba’s tourism development, yet it will substantially affect the US economy and American jobs. Many US companies have started to invest in and do business with Cuba in view of the immense potential of Cuban tourism, which other countries will surely continue to benefit from.”

The UNWTO pointed out that tourism is one of Cuba’s key economic sectors, supporting the livelihood of many and drawing significant interest from foreign investors.

In 2016, Cuba welcome over 4 million international visitors – growing by over 1 million visitors in just five years.

The WTTC’s Scowsill points out that: “Airlines, cruise lines and hotel groups have all made significant investments and plans to create jobs and to grow the industry in Cuba, based on clear direction from the previous administration. Our sector needs consistency from governments and stability of policy. This is a clear and unwelcome reversal.”

He noted as well that: “There is latent demand from the US for people to visit Cuba to explore its history and culture, and it would be a retrograde step to revert once again to Americans traveling in groups. Over the last months the uptake in travel from the US to Cuba has not been as high as expected, primarily as hotel capacity has not kept up with the demand, leading to some of the US airlines cutting back capacity to the island. President Trump’s announcement will put further pressure on the airlines.”

Virtuoso’s chairman and CEO, Matthew D. Upchurch also commented on President Trump’s speech regarding new restrictions on travel to Cuba, pointing out: “My dad was an industry pioneer who worked to open new tourism markets in India and Africa. Something he instilled in me through his own experience is the belief that limiting travel does not work for its intended purpose of creating an adverse economic impact. It only serves to perpetuate an ‘us against them’ mentality, which is the exact opposite of the uniting effect that travel has the power to do. Exposure between people not only fosters understanding, but robs governments of the narrative that ‘those people are evil.’ “

In its statement, the WTTC said that Cuba is already a very popular tourist destination, currently being the second most visited Caribbean island. Canadians and Europeans have steadily increased their numbers, with direct flights into various beach locations on the island.

Visitor exports, which is money spent by foreign travellers in the country, totalled US$2.8 billion in 2016. This is 19.2% of total exports – significantly above the global average of 6.6%.

The sector contributed almost $9 billion to the Cuban economy last year – or just under 10% of the country’s GDP – and we supported almost 500,000 jobs, which is about one in eleven of all jobs.

Concluding his remarks, Scowsill said: “There is plenty more scope to grow the travel sector in Cuba. The country is not reliant on the US market for further tourism growth, but it is American businesses and leisure consumers that will suffer from this proposed move.”

And he added: “US citizens have been traveling as individuals rather than on group tours. Rolling back this policy and allowing US citizens to only enter the country on organised tours, means that less tourism dollars will find their way to the Cuban people. Tourism is a force for good, it bridges gaps between cultures and empowers local people by creating jobs and income streams. We would urge the Trump administration to support the Cuban people.”