Sunwing Fam Shows Agents That All Is Well 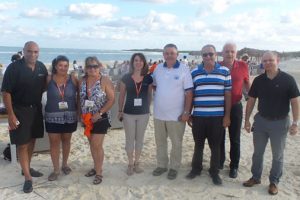 September’s Hurricane Irma huffed and puffed, but couldn’t knock the tourist trade in Cuba’s Jardines del Rey down for the count.

The Cuba Tourist Board and Sunwing – which has a large presence in those island’s off Cuba’s north coast – held a Sunday-Monday fam trip that saw about 140 agents visit hotels in Jardines del Rey which were closed following Irma. Most Jardines del Rey hotels have reopened and all will be open by Nov. 15.

The Cuba Tourist Board says fast progress was made in repairing damage that it described was mostly cosmetic, but it’s concerned travellers will be nervous about visiting Jardines del Rey.

Mohamad Fawzi Gonzalez of Blue Diamond Resorts said Irma “has been an opportunity for us to do a lot of things we wanted to do before.”

Many hotels forced to close after Irma used their closures not only to make repairs, but also undertake renovations.

Fawzi Gonzalez noted Cayo Coco – the largest of the islands in Jardines del Rey – has seen a lot of rain since Irma, leaving an island that lost vegetation during the storm to once again look green.

“Now we have a new product,” Fawzi Gonazlez “They [visitors] will see something different.”

He added that Cayo Coco beaches – the cornerstone of Jardines del Rey’s tourist trade – actually gained sand thanks to Irma.

“Apparently bad things can bring good things,” he said of Irma.
Meanwhile, one of the agents on the trip, Danuela Freel of Four Point Travel in St. Catharines, Ont., said resort employees were eager to see Canadians return.
You can feel the vibes and see it in their faces. Every single staff member is eager and excited to offer their high energy, and entertaining, gracious services,” she said. “They have missed spoiling Canadian travellers. Canadians should take advantage of the great deals. Enjoy the attention to service provided, visit Cuba now, tip them generously, and enjoy their heartfelt hospitality. They deserve it!”
Among hotels that hosted the Sunwing Group was the Pestana Cayo Coco, which hosted a party that among other things featured a beer-and-wine-filled sailboat in the lobby for thirsty travel agents. 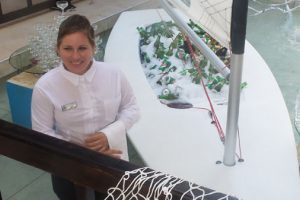