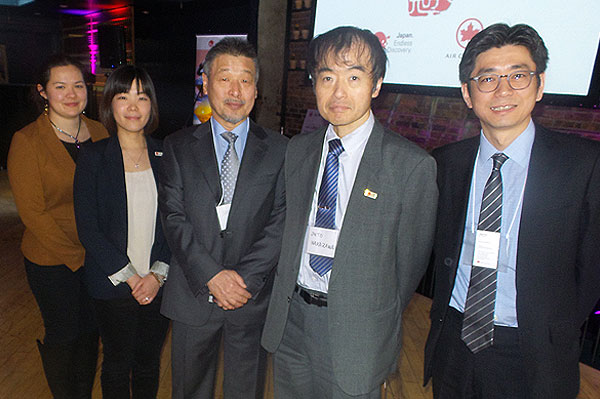 The JNTO had celebrity chef Susur Lee offer insights into Japanese cuisine at one of Lee’s downtown Toronto restaurants, with Lee – who oversees several eateries, frequently appears on television and has visited Japan to learn about its food – praising the Asian nation’s dishes.

“I think it’s one of the hot cuisines in the world,” he told PressToday, adding some ingredients used in Japanese dishes in Japan aren’t available outside the country, meaning those who visit Japan can experience tastes not found elsewhere.

Shin Kawai, Tokyo Tourism’s Canadian director, in turn said food is “probably the No. 1 item people like to experience” when travelling.

Visitors always say “how wonderful” the food in Japan is and are impressed by its careful preparation, he continued.

Lee also told his audience that Japanese “culture is so deeply rooted in food” and those who visit Japan will “really get to understand the culture, the food and the people.”

Pictured are the JNTO’s Priscilla Portsmouth and Nao Matsumoto, Kawai and the JNTO’s Hideaki Nakazawa and Keita Kadowaki.