Home › Contests › Cunard to Host Premiere of ‘The Greatest Showman’

Cunard to Host Premiere of ‘The Greatest Showman’ 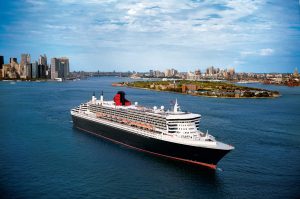 Cunard and 20th Century Fox have partnered to roll out the red carpet when the Queen Mary 2 hosts the world premiere of 20th Century Fox’s “The Greatest Showman” in December.

“The Greatest Showman,” starring Hugh Jackman, Michelle Williams, Zac Efron, Rebecca Ferguson and Zendaya, is an original musical that tells the story of visionary P.T. Barnum and how he created the Barnum & Bailey Circus. The film, directed by Michael Gracey and written by Jenny Bicks and Bill Condon, with original music by Oscar- and Tony-winning duo Benj Pasek and Justin Paul, will debut in theatres nationwide on Dec. 25.

P.T. Barnum sailed multiple times on various Cunard ships to cross the Atlantic between New York and England. His most notable voyage was in 1850 when he invited legendary opera singer Jenny Lind (the “Swedish Nightingale”) to come to America with him to be part of his show. They sailed into New York on Cunard’s Cambria with almost 40,000 fans greeting them at the docks.

“Queen Mary 2 is the perfect stage for our world premiere of ‘The Greatest Showman,’” said Zachary Eller, executive vice-president, Marketing Partnerships, 20th Century Fox. “Not only is there a real tie to P.T. Barnum’s affinity for sailing Cunard, but Queen Mary 2 also provides that perfect touch of dazzle and wonder that brilliantly complements the essence of the film.”

Scenes from the movie were shot in the original US headquarters of Cunard, a magnificent Italian Renaissance-style landmark building located at 25 Broadway in lower Manhattan. In addition, a number of scenes were shot in Brooklyn, Queen Mary 2’s US homeport.

“The Greatest Showman’s” Emmy Award-winning costume designer Ellen Mirojnick will also sail in December on the transatlantic crossing from New York to England following the premiere, offering talks on her career and showcasing her designs from the movie while mingling with guests.

In partnership with 20th Century Fox, Cunard has also announced a public sweepstakes that will afford a winner and guest the chance to attend to the premiere. Visit https://www.cunard.com/campaigns/greatest-showman-sweepstakesfor more information and rules and regulations.