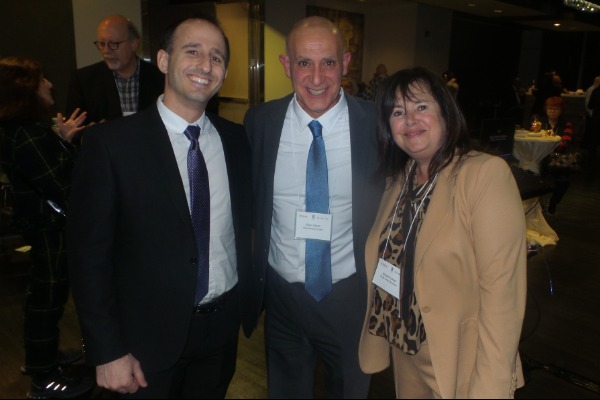 The property – slated to reopen shortly after renovations – among other things features a pool table in a swimming pool, along with what’s reportedly the only 18-hole golf course in Israel.

And, Eitan Sasson, Dan’s North American director of sales and marketing told a Wednesday Toronto audience, the hotel is in a historically significant area, with Caesarea being the site from which the country was governed when it was under Roman rule.

Sasson reported that Dan – which bills itself as “the first and most prestigious hotel chain in Israel” – now has 17 hotels throughout the country, but added that its “growth is always measured.”

Around half of the company’s clients are from North American.

Sasson noted Jerusalem’s King David hotel – which overlooks Jerusalem’s Old City – is another Dan property, with that long-standing hotel having had the same lobby since 1930.

Another King David highlight is its having the oldest continuously operating restaurant in Israel, Sasson said while labeling the King David “super-deluxe.”

Other cities that Dan has a presence in include Tel Aviv and Haifa, and it’s in the Red Sea resort destination of Eilat.

Meanwhile, Gal Hana of Israel’s Ministry of Tourism said he’s confident that travel industry will weather current crises like coronavirus. Hana noted the industry has had to deal with crises in the past.

“I think what makes the Canadian market unique in a good way is the professionalism and experience…,” he said.

Hana added he’s confident that this year will be a good year for his homeland’s tourist trade and tourism in general.