Home › Destinations › Dealing With The Aftermath

Dealing With The Aftermath 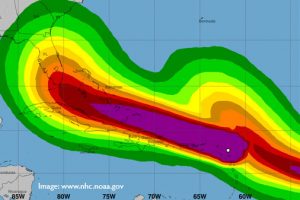 Reports continue to flow in detailing the effects of Hurricane Irma, and the following is a round up of information available to Press Today as it prepared for its daily distribution release.

Saying the UNWTO was deeply saddened by the tragic effects of Hurricane Irma across the Caribbean, the secretary-general, Taleb Rifai said that, “On behalf of the international tourism community, UNWTO conveys its heartfelt condolences to the families and friends of the victims and stands ready to support the affected countries, where tourism is a pillar in the lives of so many people, to recover as swiftly as possible.”
Rifai indicated that, “UNWTO will work alongside the affected countries in all the necessary measures to support them and trust that as in previous occasion the people of these countries will show their resilience as life gets back to normal and they open for business.”

The U.S. Virgin Islands Department of Tourism has advised that full assessment on the impact of Hurricane Irma is underway and while St. Croix is getting back to business, visitors are being encouraged not to visit the district of St. Thomas and St. John.

In a message to travel partners, Commissioner of Tourism Beverly Nicholson-Doty expressed thanks for the prayers and support the U.S. Virgin Islands has received following the Category 5 hurricane, the eye of which passed north of the Territory on Wednesday.

“The island of St. Croix did not receive the full brunt of the storm, and the Henry E. Rohlsen Airport on St. Croix received its first commercial flight (JetBlue Airways from San Juan) on [Sept. 8],” the Commissioner advised.

She reported that communications are still limited, there is significant damage to infrastructure in St. Thomas and St. John, and the Cyril E. King Airport on St. Thomas will not be open for commercial traffic before the next weather system passes the area this weekend.

The storm has resulted in four casualties to date on the island of St. Thomas. “We are deeply saddened that lives have been lost and extend our condolences to the families.”

“To ensure everyone’s safety, we are requesting the postponement of all scheduled visits to St. Thomas and St. John,” the Commissioner implored, advising that there is significant work ahead to help residents of the district.

Anguilla has begun its response and recovery effort in the aftermath of Hurricane Irma, an island wide process coordinated by the National Emergency Operations Centre. A complete assessment is still underway, overseen jointly by His Excellency, Governor Tim Foy, and the Chief Minister, The Hon Victor Banks.

Repair and road clearance crews are working diligently in efforts to restore conditions to pre-Irma status, and as the clean-up begins the full extent of the damage is being revealed.

There was one confirmed fatality and the government and people of Anguilla extend their deepest condolences to the family.

The British government has deployed three humanitarian aid experts from the UK to assist with needs assessments and coordination, in addition to FCO and DFID staff that are already in the region. The British naval ship Royal Fleet Auxiliary Mounts Bay has arrived on island, with 40 Royal Marines and Army Engineers on board. The ship carries a range of equipment to support humanitarian responses including vehicles, tents and facilities to purify water.

“Anguillians are a resilient people, particularly in the face of adversity,” said the Hon. Victor Banks, Chief Minister. “We are one family, and the government is committed to securing the resources necessary to ensure that we rebuild and recover in short order from this misfortune. We intend to be open for business before the Christmas season.”

“The destruction caused by Hurricane Irma in the British Virgin Islands has been devastating. With cell phone towers down and power outages, it has been difficult to receive communication from within the territory, and to fully assess the damage. The destination has lost entire structures and many homes are without roofs, or have been diminished to merely foundations.”

“The government has begun to coordinate humanitarian relief efforts and an initial clean-up operation. We received word that the UK government is sending Royal Navy flagship HMS Ocean to offer relief and support, hopefully arriving Sept 8.”

“Please keep your thoughts and prayers with the people of the BVI, and send donations to the BVI Recovery Fund, set up on behalf of the government, in partnership with Pledgeling.”

“We want to thank everyone for the outpouring of support for the BVI community. The people of the British Virgin Islands are resilient and we are confident we will be able to rebuild.”
Go to http://pledgeling.us/bvi .

Barbuda and its 1,600 residents were severely impacted by Hurricane Irma which passed directly over the small island, resulting in one fatality. Ninety-five per cent of buildings including private properties and government facilities were destroyed or extensively damaged.

Barbuda’s hotel infrastructure was also damaged, but with less than 100 hotel rooms the overall effect on tourism is minimal.

The countrys disaster recovery plan swung into full effect on Sept. 8. To speed-up the relief and rebuilding efforts, the government declared a state of emergency for Barbuda only and evacuated some residents on a voluntary basis. At the same time, emergency supplies of bottled water, cots, and medicines have been purchased by the government and have been flown into country.

The Government of Venezuela has also made two aircrafts available to transport goods to Barbuda as well as a medical team of 20 doctors and nurses with disaster response experience.

Relief efforts, coordinated by the National Office of Disaster Services along with the Red Cross, have begun in earnest with multiple relief flights and vessels landing on Barbuda today.

Tourism Minister Asot Michael said, “The government will do whatever it takes in the short-term to get Barbuda on its feet again. However, the best way to help our islands as we return to normal is for visitors to continue with their vacation plans or make plans to visit us soon to experience firsthand the warmth and hospitality of our people.”

Antigua is open for business as normal activity resumed after a brushing from Hurricane Irma. The V.C. Bird International Airport opened for all flights on Sept. 7 and electricity was restored to the capital city St. Johns and most parts of the island.

As it continues it island-wide assessment, the Puerto Rico Tourism Company says that the preliminary report shows that major tourism infrastructure and attractions are operational and the island can continue to welcome new visitors.

The PRTC said that while power outages are present throughout the Island, many hotels, as well as essential services on the island such as hospitals, are operational due to generators and the majority of hotels throughout mainland Puerto Rico are ready to welcome new guests.

Attractions such as parks and beaches are currently being assessed to ensure a committed focus on quick clean up in the coming days.

The Dominican Republic’s Ministry of Tourism reports that the country’s tourist destinations were not affected by Hurricane Irma and continue to operate normally. Roads, ports and airports are operating
without interruption as well as public services, such as water and electricity in hotel facilities.

“Operations are continuing normally at tourist resorts. Thankfully, and with the help of ample security and prevention protocols, no tourist or any of the hotel facilities suffered any damage.”

And the president of the National Association of Hotels and Restaurants of the Dominican Republic (ASONAHORES), Joel Santos, added:

“We are pleased that Hurricane Irma passed through the Atlantic coast of our country without causing damages that impede the operation of our hotel infrastructure and the other fundamental services we offer to tourists. Proof of this is that tourists continue to arrive and leave the country. ”