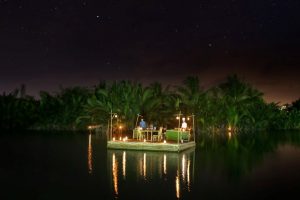 A recent survey of choice tables, inspiring balconies and powder-white sands across Asia has identified a number of spots where the odds of landing a “yes” on a marriage proposal are higher than usual.

Surveyors have found that a combination of factors – some ineffable, others effable – contribute to a reorientation of astronomical bodies such that recipients of the big question are more likely to answer in the affirmative.

“When a couple sits at a certain table in the Bel Air Bar and Grill, directly opposite the fountain and facing the window, the stars line up without fail,” said Paul Ou, marketing and communications manager at the Grand Hyatt Taipei.

Ou said more than 100 marriage proposals have been launched from that “proposal table” since the hotel opened in 1990 and that the success rate is 100%t.

At Palace Hotel Tokyo, the concierge team fields requests for assistance from would-be grooms at a heady pace, so much so that they’ve started tracking the request rate. At present, they are averaging one big ask per week. Proposals take wing all over the hotel, from guest room to private balcony, but the geomancy is more than a little bit auspicious at one particular table in the hotel’s French restaurant, Crown, the hotel says.

The booth is semi-private, and there’s often a fire crackling in the hearth. The hotel says it’s the view of Wadakura Fountain Park and the city skyline that’s the real draw. If the proposer is promising a big bold life in matrimony, that view is really going to help make the case.

In Vietnam, Exotic Voyages has noticed a trend with one particular restaurant in Hoi An where proposals are popping with champagne bottles on a regular basis. The tour operator steers nascent brides and grooms on a sunset cruise by bamboo basket along the Co Co River to The Field restaurant in the countryside. They dine in a bamboo raft drawn up on the river bank and decorated with flowers and complimentary wine or champagne.

“We think it’s the combination of the sunset cruise coupled with the private riverside dining experience that really has set the mood for this to be the spot,” said Andrew Carroll, global head of sales and marketing at Exotic Voyages. “We’ve tried other places, but none are as successful as this particular place.”

Further testament to the power of sailing and sunsets can be found in Halong Bay, where at least once a month someone takes a knee at that time of day aboard a Paradise cruise.