Curio – A Collection by Hilton coming to Atlanta 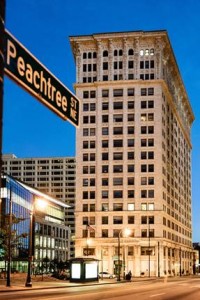 Hilton Worldwide has signed a franchise license agreement to bring Candler Hotel Atlanta to Curio – A Collection by Hilton.

The Candler building is a beloved fixture of Atlanta’s history and design and stands as one of Atlanta’s oldest landmarks. The iconic structure was originally developed over a century ago by one of Coca-Cola’s formative businessmen, Asa Candler. When built in the early 1900s, it was Atlanta’s first steel skyscraper.

Significant renovations will transform the former office building into a 265-room hotel featuring oversized king, double queen and suite rooms. The main level of the hotel will feature the Candler Building’s well-known Georgia-white marble grand staircase, original Tiffany windows, a restaurant and bar where Mr. Candler’s bank was formerly housed, lobby and lounge area. Meeting and event space will be available as well as an outdoor rooftop space.