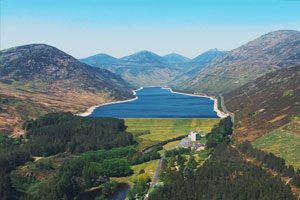 It takes in places such as the Mourne Mountains, the Giant’s Causeway and Game of Thrones filming locations, and can be seen at https://www.youtube.com/watch?v=rFrbBHi6MPY.

Northern Ireland is packed with natural and historic gems and the rise of drones has allowed potential visitors to appreciate these places in a way that has never been done before. The footage, which is just over a minute long, contains coastal and mountain vistas, epic castles and volcanic landscapes, using tranquil music to underscore the views.

Five fast facts about Northern Ireland: The Giant’s Causeway is a UNESCO World Heritage Site that attracts half a million tourists each year; The Dark Hedges is an iconic avenue of serpentine beech trees, which appeared in HBO’s Game of Thrones as the Kingsroad; The Mourne Mountains inspired author CS Lewis when writing The Chronicles of Narnia; Royal Portrush Golf Club will host the Open Championship in 2019; The Carrick-a-rede rope bridge was erected in 1755 and welcomes an annual quarter of a million visitors.