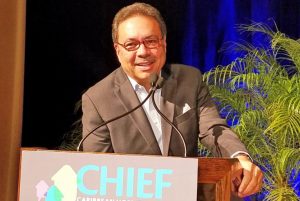 Suárez, vice-president of Institutional Relations and Projects of Grupo Puntacana in the Dominican Republic, received the coveted honoor at the opening of the third annual Caribbean Hospitality Industry Exchange Forum (CHIEF), hosted by CHTA, in Miami.

Accepting the region’s premier hospitality award, Suárez, a former CHTA president, recognized his colleagues, friends and family, while reminding delegates in attendance to “embrace unity, diversity and ingenuity” in the Caribbean.

“Simón Suárez is a pioneer in Caribbean hospitality. He has played and continues to play a major role in the development and growth of Caribbean tourism, and we are indebted to him for all that he has done for his native Dominican Republic and the Caribbean,” said Frank Comito, director general and CEO of CHTA.