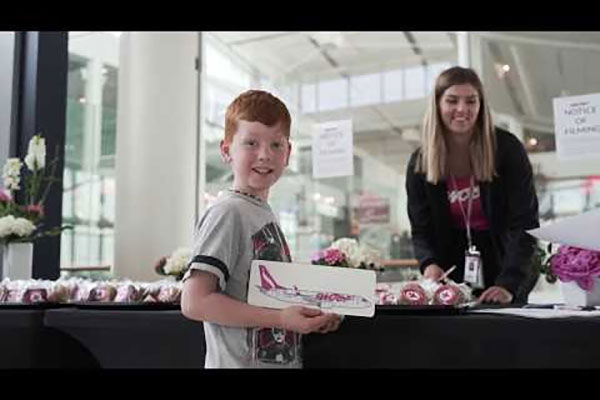 Swoop celebrated its one-millionth traveller on a flight from Edmonton to Hamilton earlier this week.

William and Emily Burchat were surprised to be selected as the lucky recipients of a round-trip for two on Swoop and a commemorative, Swoop-branded, model aircraft. The pair were travelling to Hamilton with their twin infant daughters who were meeting their grandparents for the first time.

A small Swoop team was on hand in Edmonton to kick off the festivities, which included celebratory décor and refreshments at the gate. Travellers were encouraged to record their favourite travel stories at the Swoop Stories Video Booth to be shared on the Swoop social channels. Every traveller received an exclusive Swoop luggage tag, promo code and the hugely popular, Swoop piggy bank.

“We suspected the millionth traveller would be flying this week, so we decided to have some fun and share the experience with an entire flight,” said Greenway. “After all, every traveller is equally as valued and we were eager to show our appreciation in a unique way.”
Swoop is a month shy of reaching one full year of operation, having begun flights on June 20, 2018 with an initial fleet of three aircraft and a network of five Canadian cities. Since then, the airline has expanded service to include 16 destinations across four countries.