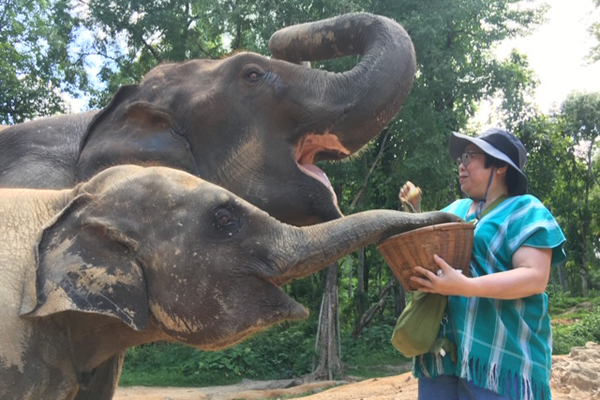 Luxury stays, premium flights and new discoveries were in store for a group of six travel agents/tour operators from Canada who visited Thailand on an all-inclusive fam tour recently.

The trip was sponsored by the Thailand Authority of Tourism and made visits to Bangkok, Chiang Rai (Golden Triangle), Chiang Mai and Phuket – plus the Thailand Travel Mart held in Pattaya.

Flights by Cathay Pacific in their premium economy class cabins were included for the six retailers – three from Toronto, one from Ottawa and two from Vancouver. Amongst them was Marian Lam (pictured), general manager of JBC Travel in Richmond, BC.

“It was a very successful trip for me, as I had the chance to visit many new sightseeing spots and join the Thailand Travel Mart held at Pattaya. There, I was able to meet many hotel reps and DMC companies,” said Lam.

Attraction highlights on the trip included the Patara Elephant Farm at Chiang Mai, where the Canadians spent the day making friends with the elephants by bathing and feeding them. Another highlight was sailing onboard a private yacht from Phuket to scenic Khao Ping Kan, renowned as James Bond Island. And yet another was a visit to the Opium Museum in the Golden Triangle anchored by Chiang Rai, to see how the government has transformed opium farming operations to profitable coffee plantations.

Lam noted that all the hotels for the group were at a “deluxe” level of quality. She cited the Hotel Muse Bangkok and 137 Pillars Suites & Residences in Bangkok as new luxury properties with prime locations. Also hitting the right notes was the Shangri-La Hotel in Chiang Mai, which earned kudos for its management style, she said. Maybe most impressive of all was the Banyan Tree Phuket, which provided a stay in a villa with private pool. Very nice.

Another trip highlight was the flights by Bangkok Airways for the domestic portion of the trip, said Lam. She noted that the boutique airline provided top service and meals, as well as a self-service lounge for all customers, including economy class passengers. It is located at Suvarnabhumi Airport (Bangkok) Terminal D and offers snacks/drinks, lounge seating, access to computers and WiFi service.

“It was a new flying experience for me,” she said.