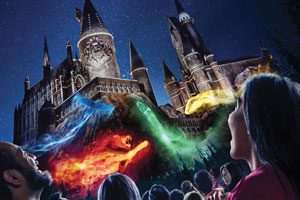 Beginning June 23, guests are invited to see “The Wizarding World of Harry Potter” in a whole new light when Universal Studios Hollywood introduces its all-new “The Nighttime Lights at Hogwarts Castle,” featuring a dazzling light projection experience against the backdrop of Hogwarts School of Witchcraft and Wizardry.

As night falls on Hogsmeade village, the lights will shine brightly with an awe-inspiring spectacle that showcases the four houses of Hogwarts – Gryffindor, Ravenclaw, Hufflepuff and Slytherin, culminating with awesome beams of lights that fan into the night sky.

This new summertime feature will take place multiple times a night during its run. Live rehearsals with annual pass previews and very limited guest access will begin in June in preparation for the June 23 grand opening.