A Floor With A View 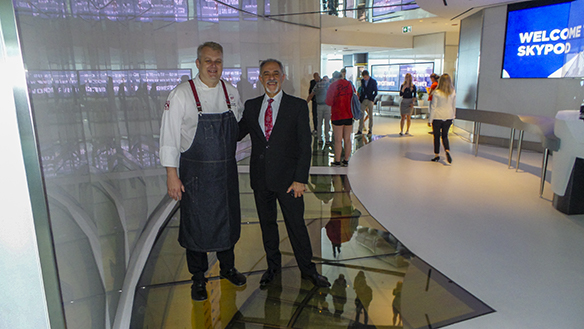 (photo above: Standing on the new glass floor in Toronto’s CN Tower are the Tower’s executive chef John Morris and Alexi Hakim, general manager of the InterContinental Toronto Centre.)

Toronto’s CN Tower believes that looking way down is very uplifting. And so it’s given visitors added opportunities to do just that.

The iconic attraction this week showcased enhancements to its lofty Lookout Level, which included the addition of a glass floor that’s directly above the glass floor on the level immediately below, enabling those safely standing on the specially designed upper glass to look through two sheer levels of flooring and see the streets of Toronto nearly 1,150 feet below. Those standing immediately below the new glass addition and looking directly up will only see their reflection.

Each of the glass footings measure around 200 square feet, with the upper one providing a slightly more expansive view, thanks to technological advances that meant it needed less structural support.

The CN Tower, which dates back to 1976 (the first glass floor was installed in 1994), remains the tallest structure in the country, dominating Toronto’s towering skyline.

Intrepid summertime CN Tower visitors can undertake EdgeWalk, which has harnessed daredevils dangle off the sides of the structure’s uppermost reaches, an experience Pawlicki has herself done and concedes isn’t for the faint of heart. “You’re out in the elements and the wind is in your face,” she noted of EdgeWalk.

Both the glass floors also provide dramatic views of Toronto,, but don’t require the same steely resolve as EdgeWalk does, Pawlicki stated. “This one anyone can do.”

The CN Tower is now the only structure in North America to have two glass floors directly aligned in that manner.

Other renovations to the Lookout Level include adding floor-to-ceiling windows throughout much of the level, ensuring all visitors, including those in wheelchairs, can effortlessly see the city far below. The attraction consulted with the likes of the Rick Hansen Foundation to increase accessibility for the disabled. The new open floor design allows “for truly universal access for people of all abilities,” according to tower officials.

The tower’s renovations quickly won the approval of Andrew Weir, executive vice-president and chief marketing officer for Tourism Toronto, who said the renovations make the tower more accessible for all. “Anyone can enjoy the experience of that view.”

InterContinental Toronto Centre general manager Alexi Hakim, whose property is found a stone’s throw from the attraction, labelled the tower “awesome,” adding the enhancements will help attract not only “people who live in Ontario, but from all over.”

The InterContinental Toronto Centre has actually partnered with the CN Tower, offering a package that provides hotel rooms and tower tickets. “They [immediately] get the ticket and they’re ready to go [up the tower],” Hakim said.

Weir added that the area the CN Tower’s in features numerous hotels and entertainment options, among them Ripley’s Aquarium.