Home › Digital Post › A passion for tourism: Germany puts on a show at GTM 2018

A passion for tourism: Germany puts on a show at GTM 2018 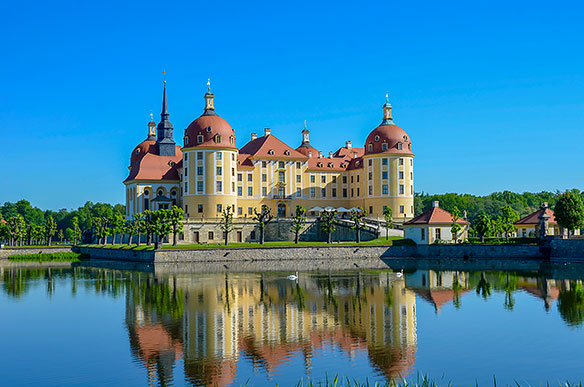 (Photo above: The 44th annual Germany Travel Mart was held in Dresden.)

Along with reunification, the CEO of the German National Tourist Board believes the fall of the Berlin Wall in 1989 also played a significant role in helping shape Germany into the thriving tourist hub it is today.
“The fall of the Berlin Wall was also a tourism gift,” Petra Hedorfer said at the recent Germany Travel Mart (GTM), the largest business-to-business workshop for Germany’s inbound tourism industry. “All of us tried to reconstruct the country, tried to make sure we have interesting travel destinations.”
By the numbers, over-night stays by foreign visitors have increased by 49.2 million over the past 25 years, and global demand for the destination is up 142% since 1993.
“Tourism is a core asset for the German economy,” she said. “It really is a success story.”

The main event
A prime example of a German city that’s undergone a remarkable transformation over the past few decades — and one that continues to increase and build on its tourism offer — is Dresden, where the 44th annual GTM was held.
“The GTM is an ideal platform for satisfying the existing high demand for travel to Germany and for harnessing untapped potential,” she said, adding that Dresden has changed significantly since it last hosted the travel mart in 1998. “For us, this means intensive communication with the traditional travel trade, as well as with online tour operators.”
More than 500 travel industry representatives from 51 countries attended this year’s show, which included sales and networking sessions for buyers and travel agents to meet with regional tourism organizations and exhibitors within the hotel and transportation industries, as well as opportunities to discover some of the highlights of the surrounding area during functions like a sunset boat ride on the Elbe river.
“We, Germany, stand for openness and tolerance, and we welcome people of all nations with great respect, and I’m saying this from the bottom of my heart,” she said. “Let us do everything we can to ensure that we continue to bring cultures and nations together all around the world. That’s our industry, that’s what we’re working for everyday.”
As the show takes place in a different location every year, in 2019 the 45th annual GTM will be held in Wiesbaden. 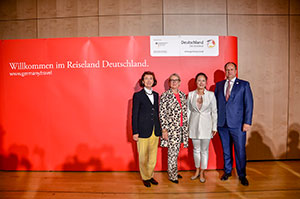 Brigitte Goertz-Meissner, chairwoman of the advisory board, GNTB; and Petra Hedorfer, CEO, of the GNTB with the mayor of Dresden, Dirk Hilbert (r), and his wife Su Yeon Hilbert.

A numbers game
With 83.9 million overnight stays recorded last year, 2017 marked the eighth record year in succession for the European country. Tourism to Germany continues to grow, not only among leisure travellers, but also for those travelling for business.
Overall, the number of overnights increased by 3.6% compared to 2016 with 79.3 million overnight stays, and 7.9 million trips were made to Germany from overseas markets, representing 9% more than in 2016.
“Inbound tourism to Germany has been particularly buoyant throughout 2017,” she said, adding that the stats don’t include a significant portion of travellers staying through the sharing economy. “Growth at the end of 2017 almost trebled compared with the previous year. Positive economic data, political stability in important source markets and the excellent positioning of the Destination Germany brand in the international market all contributed to this strong showing. We scored highly with guests from around the world, especially as a holiday destination.”
Noting an end to the phase where some people were hesitant to travel to Europe, she said Germany saw a growth in demand in 2017 from overseas markets, with 20.9 million overnight stays registered, an increase of 6.8% over the previous year.
“Destination Germany has seen rapid growth in a highly competitive market,” she said, noting that one in seven jobs in Germany depends on tourism, whereas the global average is one in 10.
With a year-over-year increase of 8.4%, Canadians are also contributing to the growth in overnights.
In fact, Hedorfer told Canadian Travel Press that Canada remains an important focus and that the GNTB is “totally dedicated to the market.”
Looking ahead, Destination Germany predicts international overnight stays to increase between 3% and 4% in 2018. Already 2018 figures are showing a further increase in overall overnights, with a 5.2% growth noted in January and February.

Keep them coming
In order to sustain growth in overnights, the GNTB will continue to promote travel and awareness of Germany in international markets through its core themes: Towns, Cities and Culture (which includes city breaks, food and drink, UNESCO World Heritage Sites) and Nature and Recreation, as well as on its annual campaigns.
“We are a holiday destination, and we want to make sure that people yearn for Germany,” she said.
This year’s theme is Culinary Germany, while 2019 will focus on Bauhaus, and 2020 will centre on the 250th anniversary of Beethoven, as well as the 42nd Oberammergau Passion Plays.
“I think there is one big story coming up in 2020, it’s this Passion Play Oberammergau, and I know there are some target groups who are very much interested,” she told CTP. “I think there will be a tremendous increase, especially for this reason.” 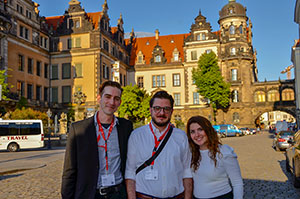 Trade takeaways
On hand from Toronto, Robert Craig, product development manager at Craig Travel said he attended GTM to stay up to date on new attractions and upcoming events happening in the country, as well as to experience new parts of Germany.
“With Oberammergau 2020 coming up, we are focusing a lot on Germany in the coming years,” he said. “It is always an important destination to us, but this once-in-a-decade event always brings a lot of excitement to passengers and agents a like.”
Although a significant amount of bookings to the destination are made online, Hedorfer told CTP that, while the GNTB is cooperating with other parts of the business, it’s still committed to the trade.
“We still believe (in the trade) otherwise we wouldn’t do this travel mart any longer,” she explained. “So we still have this close cooperation, but there is of course a budget spread because new partners are appearing, so we also have to work with them.”
However, she pointed out that the “tourism industry is more than ever a people’s business.”

Not overtourism
And, while predictions indicate Germany’s inbound tourism industry could potentially reach 121.5 million overnight stays by 2030, Hedorfer told CTP she’s not yet concerned of any overcrowding or overtourism.
“Looking at the hotel occupancy rates, we still have capacity and in some regions, even federal states, it’s less than 50% occupancy rates, so personally I’m not threatened by this,” she said.
Although there can be long queues on national holidays, in particular, in places like Berlin’s Brandenburg Gate, she says it hasn’t come to the point where travellers are no longer enjoying their experiences in
the destination.
“It’s a question of managing the flow, making sure that security issues are well prepared, of course, but I think we’re very trained to do so,” she says. 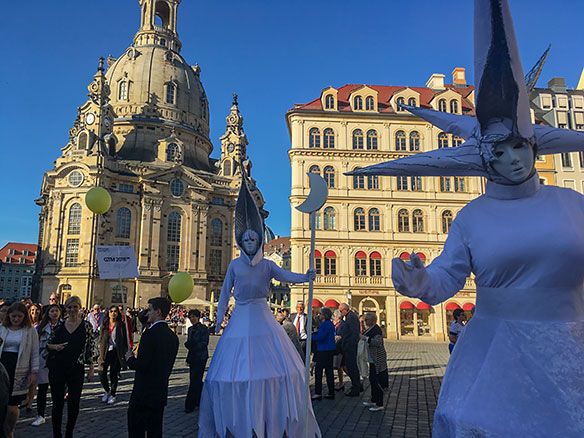