A-wandering this hotel will go 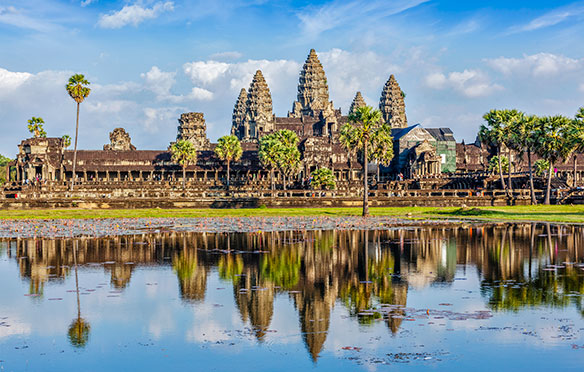 (Photo above courtesy THE TRAVEL CORPORATION)

Thierry Tessier is a man on the move and so is his hotel.
The veteran French hotelier’s latest project has him preparing to open what he and Small Luxury Hotels of the World says will be the world’s first “wandering hotel,” with the property expected to open in Salento, Italy, this fall then move to Siem Reap, Cambodia, followed by other destinations.
Those destinations could be Brazil, Colombia, Panama’s San Blas Islands, Sri Lanka, Japan, Nepal, Bulgaria, Denmark, Iran, and different African countries.
700,000 Heures will only welcome guests in a given location for five or six months before packing up its hospitality industry belongings and reopening in another part of the world.

First of its kind
“Our wandering hotel is the first in the world and will be permanently on the road,” Tessier says. “This is something that is a first of its kind.”
The unusual project won’t see the hotel use any new-build structures, instead converting private homes that the owners can reuse as homes after the hotel relocates, if they choose.
“The best places in the world are private houses,” says Tessier, who’s worked in the hotel industry for decades “We spend a lot of time finding the right place and work with the owners to rent them for a few months.”
Hotel staff in the different locales will be recruited from NGOs, with Tessier saying they will receive the needed training. “Of course, a professional team will also follow around the world to serve our guests.”
Those wanting to stay in the hotel must become a member of the 700,000 Heures club, with Tessier saying his plan calls for his property “to work all year-long for the same guests instead of finding many new clients.”
He says that the hotel can “continue for as long as possible” if it’s successful, although guests will only have half a year to experience it in one particular locale.

Element of surprise
Tessier’s property will be affiliated with, but not a member of, Small Luxury Hotels of the World, with SLH CEO Filip Boyen – who’s long known Tessier and says SLH welcomes “an element of surprise” for those staying at its properties – confident that Tessier’s hotel will always both be in a “beautiful spot.”
Boyen admits to never having “heard anything like it” in his many years in the hotel industry.
Small Luxury Hotels of the World – which has over 500 member hotels on every continent except Antarctica – will list Tessier’s hotel on its website, but won’t accept it as an actual member because of its on-the-continual-go business plan.
Boyen is quick to praise the “very creative” Tessier, who he says has created a pioneering project that he fully expects will pique tourist interest.
“I’ve never heard of anything like it,” he adds. “I think it will be an amazing success. I’m 100% sure of that.”
More information can be found on SLH.com .