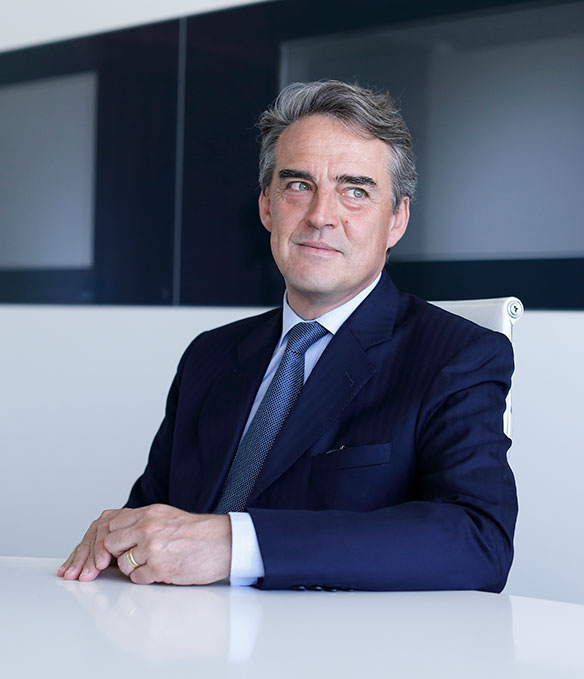 As expected, IATA CEO Alexandre de Juniac took aim at infrastructure shortcomings on this side of the Atlantic when he recently keynoted at Aviation Day USA in New York.
Pulling no punches, de Juniac stated, “I believe that we are headed for an infrastructure crisis – and that includes in the US – where we expect passenger numbers to rise 57% over the next 20 years to 1.1 billion.”
The director general noted that IATA is projecting that 7.8 billion will travel globally in 2036; nearly double the 4.1 billion who flew last year, and he told delegates, “Our requirements to meet that demand are ambitious, but they’re not rocket science. We need sufficient capacity in terms of runways, terminals and airspace, and it all must be affordable.”
But he warned, “Infrastructure is not being built fast enough to meet growing demand and, in the US, for example, the last all new major airport – Denver International – opened nearly a quarter-century ago.”
The ex-Air France chief pointed to airport privatization as a “worrying trend” leading to a greater infrastructure cost burden for airlines.
He explained, “We have yet to see an airport privatization that has, in the long term, delivered on the promised benefits of greater efficiency for airlines and a better experience for our customers.”
And he added, “To date, there has been no regulatory formula that effectively balances the interest of private owners to earn a profit with the public interest to have the airport serve as an engine of economic growth.”
According to de Juniac, “The result is that our members are very frustrated with the state of privatized airports. By all means invite private sector expertise to bring commercial discipline and customer service focus to airport management, but our view is that the ownership is best left in public hands.”
After bemoaning the fact that the US air traffic management system is falling behind in the introduction of advanced technology, de Juniac skewered government for, in effect, gouging passengers and then failing to use their money to beef up infrastructure.
He told the Wings Club audience, “One of the most troubling developments impacting infrastructure modernization is the misallocation of government fees and charges collected from travellers.
“About 21% of the average domestic ticket cost is taxes and charges and, instead of funding much-needed aviation investment, too much of this money is being spent elsewhere.’’
And de Juniac warned that the latest US federal budget proposal would see increased charges for customs and security services, much of which will be diverted to general spending.
“It’s bad enough being taxed like a sin. It’s unbearable to have those taxes spent elsewhere,” he complained.
And it’s probably just a matter of time before he paints a similar picture concerning the infrastructure situation up here.

Lots of options in family-friendly Acapulco

The oceanside destination says it has many family attractions, among them XTASEA, with the world’s largest, over-the-ocean zip-line over a mile long and reaching speeds of up to 75 mph at an altitude of 328 feet.
Acapulco also has more than 17 beaches, which extend from Barra Vieja to Pie de la Cuesta, and are this port’s main attraction. Some of the most popular are Hornos, Condesa, Caleta, and Caletilla, all of which are suitable for kids and teens to practice water sports, while parents relax on the beach.
Sea Turtle Release is one of several conservation centres in Acapulco where families can learn about sea turtles and partake in releasing and guiding the recently hatched turtles into the ocean, one of the many efforts in conserving this endangered species.
Acapulco’s crescent-shaped bay and spectacular views of the Pacific Ocean create an exotic mix for a couple’s romantic getaway oasis. The destination has been recognized as a playground for countless celebrities.
Today, couples can follow in the celebrities’ footsteps, choosing from a variety of accommodation styles, romantic restaurants, and Instagram-ready tropical settings, such as the Banyan Tree Cabo Marqués, which has 45 villas that offer ocean views. Guests can enjoy restaurants and a spa, with Asian-inspired massages and treatments indoors or beachside.
Sunset horseback riding is seen as one of the most romantic ways to view Acapulco, whether along the hotel zone beachfront or in Playa Revolcadero, with a distant view of the Bay of Acapulco.
Laguna de Tres Palos is an enormous lagoon that provides sightings of heron and other birds frolicking among the lily pads and blossoming tropical flowers’ edges.
Acapulco is also known for coming to life when the sun goes down, providing a party ambience for students looking to kick-back. Dancing until dawn is available for night owls. Beginning at midnight, nightclubs feature a variety of light and sound shows, and host live performances with DJs. Some of the most popular spots to dance the night away with friends include Baby O and Palladium.
Water sports are one of Acapulco’s biggest attractions. Its warm waters are suited for surfing, kayaking through the mangroves of Coyucalagoon, snorkeling at Isla Roqueta, a tropical forest covered island, and more.