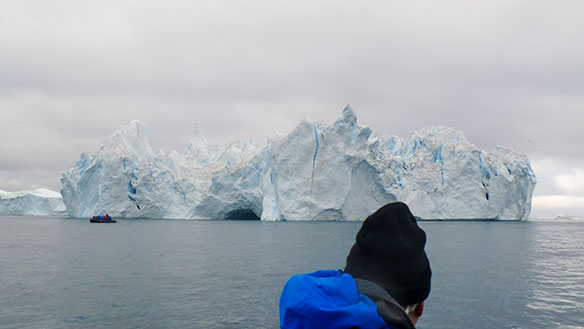 (Photo above: Adventure Canada uses Zodiacs on its excursions among icebergs near Ilulissat, Greenland.)

Adventure Canada clients who scoop up some ice on Zodiac tours off the coast of Ilulissat, Greenland, to place in upcoming drinks in their ship’s lounge can expect that that ice predates the alcohol they’re enjoying.

The Ilulissat area is home to the Jakobshavn Isbræ Glacier, which Adventure Canada labels “the fastest-calving glacier in the world (and which) spills thousands of enormous icebergs” into ocean waters every year.

The glacial ice works its way into the Arctic ocean waters, with some of that ice being small enough to scoop up by hand, while other ice forms can be massive.

Ilulissat, which translates as icebergs and was the birthplace of famed polar explorer Knud Rasmussen, is also seen as a prime spot to see the effect global warming is having on the Arctic.

Ilulissat-area icebergs – one of which, some speculate, was responsible for sinking the Titanic – can look large to those in the Zodiacs. Most of a ‘berg is submerged and, therefore, invisible to people above the waterline.

Guide Jim Narraway notes the Zodiacs have to keep a careful distance from icebergs, with “impact waves” a possibility if a large chunk of ice breaks free and crashes into the water.

“This is my favourite Zodiac ride in the world,” she says of the Ilulissat excursions.