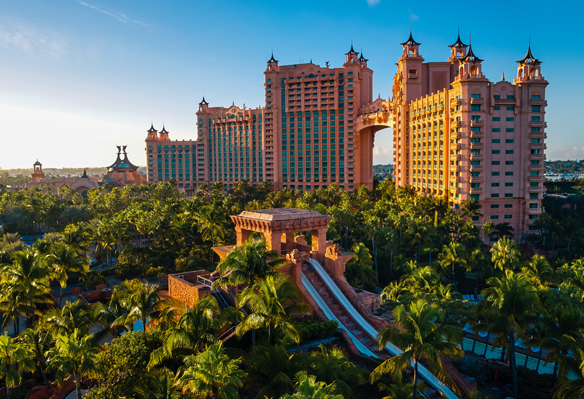 Atlantis, Paradise Island has been welcoming guests for more than 20 years.

The eye-catching Paradise Island property, at 3,800 rooms the largest property in the Bahamas and perhaps in all the Caribbean, has quietly worked to heal mammal and reptiles alike, with resort spokeswoman Sydney Engel saying her property’s over 165 biologists, veterinary and other staff are quietly committed to coming to the assistance of finned and flippered residents of the archipelago.

Engels Atlantis, Paradise Island colleague Katie Longley indeed recalls a dolphin with severe back issues being held above water by employees to prevent it from drowning after it was brought to Atlantis.

“They (employees) literally had to stay in the water for three days holding the dolphin up,” she recalls.

Caring for the animals

Among other creatures cared for was a malnourished manatee dubbed Manny who was fed a daily diet of 144 heads of romaine, 24 bags of kale and four bags of spinach, prompting some to joke that the Bahamas was in danger of running out of kale because of Manny’s voracious appetite.

Engel says many are unaware of the resort’s dedication to caring for the Bahamian environment, citing the likes of a coral nursery that produces coral to help restore depleted reefs and its commitments to environmental research and education.

Atlantis, Paradise Island opened in 1994 and saw further additions in 1998 that now have the massive resort offering five towers, each aimed at a different budget segment.

The resort has 21 restaurants and 19 bars and lounges; the Aura Nightclub, which has VIP seating, DJs, a sunken dance floor and two bars; and a casino home to 90 table games, 750 slots and a Las Vegas-style Race & Sports Book.

Also found are a fitness facility that includes yoga, personal training, a pool, six tennis courts and a basketball court; and a spa featuring 34 treatment villas, plunge pools, sauna rooms and other features.
Aquaventure is a 141-acre “waterscape of thrilling slides, rivers and pools,” along with The Rapids River, a mile-long river ride with rolling rapids and wave surges. It also has more than 20 swimming areas and 11 pools, three of them for kids.

Visitors can also see marine habitats made of of 14 lagoons and collectively having eight million gallons of ocean water that are home to 50,000 aquatic creatures belonging to some 250 species.

Other resort features include golfing; Blue Adventures, which enables people to explore coral reefs by snorkelling, scuba diving or snuba, and also learn how scientists and The Atlantis Blue Project Foundation are working to conserve Bahamian reefs; and Dolphin Cay, which has guests to interact with Hurricane Katrina dolphins and sea lions and which promotes conservation, interaction and education.

“It can be as big or small as you want it to be,” she says, adding restaurants and bars are found throughout the resort, and shuttles are available for those not wishing to walk.

Engel adds that Atlantis, Paradise Island is a “multigenerational property that can accommodate everyone from an infant to a grandparent. We’re totally outside the box. We have an unparalleled program for all ages.”

The property has a distinctively Bahamian ambiance, hosting junkanoo troupes – a form of musical and costumed Bahamian entertainment – and has Bahamian dishes in restaurants that may be prepared by Bahamian chefs.

Meanwhile, Longley says the Nassau-Paradise Island was spared Hurricane Dorian’s wrath. “I don’t think you could see a leaf on the ground” in that area following Dorian, she says.