Attraction aims to make the world a more ant-friendly place 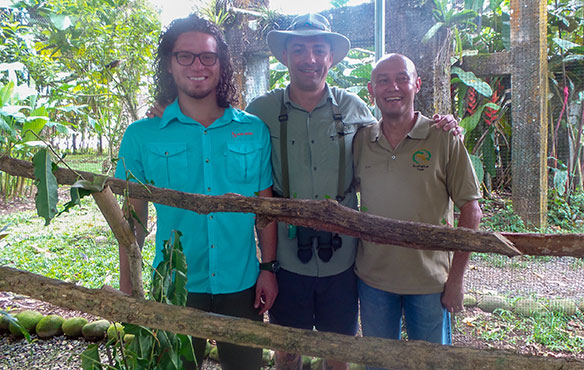 (Photo above: Standing before wood that sees a steady stream of leafcutter ants work their way back and forth are Sergio Marin of Aguas Bravas, tour guide Greivon Cubero Ramirez and Leo Herra, who’s long been fascinated by ants.)

Sergio Marin is hoping that those who visit one of the attractions at interior Costa Rica’s Aguas Bravas will be a little more careful about where they place their feet while walking.
Marin, one of the guides at the facility, found in the province of Heredia, notes among its attractions is a carefully created one that provides a showcase for leafcutter ants, creatures he says are valuable for the tropical country’s forests, but which have cousins throughout much of the world that tend to be viewed as a nuisance by homeowners and gardeners alike.
Aguas Bravas’ leafcutter display has some 80 metres of above-ground trimmed branches that serve as bridges for the industrious ants to carry bits of vegetation to the three ant colonies found at one end of the display. The vegetation is used to produce a fungus that’s a necessity of life for leafcutters.
Surrounding wire fencing protects the ants from predators and small containers of water at the base of wooden poles the branches rest on deter the ants – which can’t swim – from wandering away.
A steady stream of ants works its way back and forth during daylight, with Marin estimating the enclosure may host up to a million of them.
“Leafcutters are positive for the forest,” says the knowledgeable Marin, who notes their removing leaves can help sunlight reach the forest floor, providing other plants with sun rays needed for their growth.
“We say they’re cleaners because when they clean the forest more plants will be coming,” Marin says.
The display resulted from area resident Leo Herra’s long fascination with ants, forgiving them even when they ate the flowers he was growing.
Marin says a leafcutter can carry 20 times its weight when bringing vegetation back from one of the “supermarkets” that produce the leaves they seek.
Making the 80-metre journey takes an ant about 40 minutes.
Marin concedes that gardeners and homeowners alike are often annoyed by ants, frequently using toxins to kill them. But he says people don’t need to go to those extremes, adding that placing pungent materials – such as coffee grinds – around a garden or at a point where ants enter homes – will confuse them and keep them away.
“Ants play an important role in the ecosystem,” he says. “After our tour, you can appreciate ants. You will see ants and say, ‘They’re so important for the forest.’
“We need to find a way to live with ants.”
More information can be found at aguasbravascr.com .