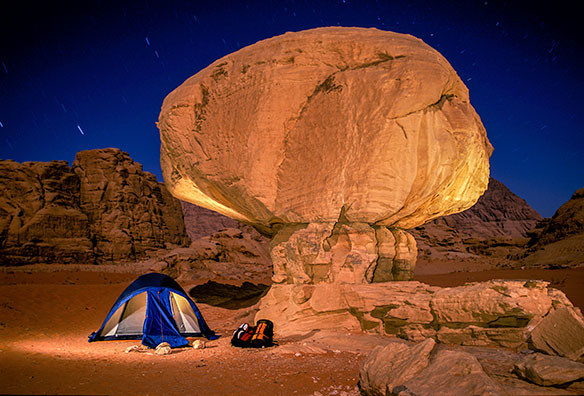 (Photo above: Wadi Rum is famed for its intriguing landscapes.)

Visit Jordan is inviting those interested in Christianity to visit a country home to a large number of reminders of that faith’s earliest days.

Malia Asfour, who oversees Visit Jordan’s North American office, notes Jordan has a large number of Biblical sites, among them Mount Nebo, from which Moses saw the Promised Land and from which ancient cities as Jericho and Jerusalem are visible. A road now leads up Nebo, which has an ancient church on it.

And then there’s the site of Bethany Beyond The Jordan, which archeologists have identified as the spot where John the Baptist baptized Jesus, which Asfour says places it at Christianity’s very beginnings.

“This is where the story started,” she says, adding devout Christians can still be baptized there.

The label, the Holy Land, is often applied to Israel, but Asfour says Jordan and the West Bank are also deserving of the title, as they too are steeped in Biblical history.

Tourism officials says Jordan’s Biblical past is only part of many interesting sides to a country, sides that are often overshadowed by the dramatic Nabataean city of Petra, named one of the Seven New Wonders of the Ancient World.

Wadi Rum – used as a desert retreat by Lawrence of Arabia during the Arab Revolt – has been featured in such movies as The Martian and Aladdin and will be seen again in the next Star Wars episode. Tourists can overnight in Wadi Rum “bubble tents” that provide a “180-degree view of the [star-lit] night. It’s pretty awesome,” Asfour says.

The Greco-Roman ruins of Jerash were one of the 10 great Roman cities that formed the Decapolis League, with Asfour’s colleague Omar Banihani noting visitors can see Roman chariot tracks in colonnaded streets. Jerash is also home to ancient plazas, baths, theatres and temples.

Asfour says Jordan is also seeing an “influx of adventure travellers,” thanks in part to the 600-kilometre-long Jordan Trail, which begins in the northern community of Umm Qays – home to Roman ruins – and works its way to the Red Sea resort destination of Aqaba. Those with plenty of time can hike the entire marked trail, which works its way through 52 villages, with hikers able to home-stay at night. Hikers can also opt for sections of a trail that showcases the different Jordanian ecosystems, such as forest, desert and mountains. The Jordan Trail also leads to such attractions as Wadi Rum and Petra, with Petra known for its structures carved from rockfaces and which Diane Molzan of Goway – who has visited Jordan – says “always exceeds your expectations.”

Asfour adds that the Dead Sea has many spa options for wellness enthusiasts.