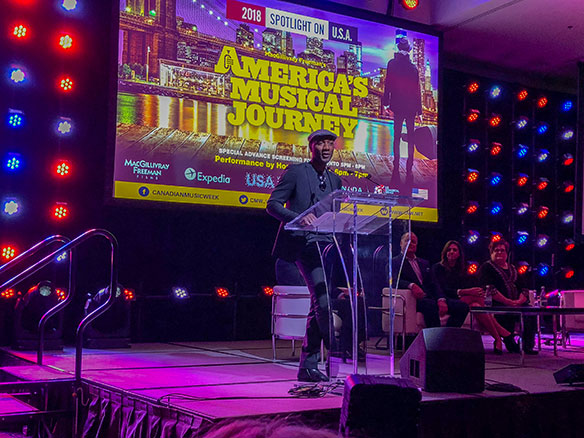 Music and travel go hand in hand, and as Anne Madison, Brand USA’s chief communications and strategy officer, says, “what a wonderful way of connecting people.”
Music is a key theme of Brand USA’s marketing strategies this year and next and the message behind the organization’s second 3D IMAX film, America’s Musical Journey.
Narrated by Academy Award winner Morgan Freeman, the film follows Grammy Award-nominated singer and songwriter Aloe Blacc as he traces the roots of America’s music and follows the footsteps of Louis Armstrong through the colourful locales and cultures where America’s music was born.
The new movie is expected to repeat the success of National Parks Adventure – Brand USA’s first giant film that became the highest-grossing documentary film in the world in 2016. America’s Musical Journey will roll out internationally in more than 14 markets – including Canada (Toronto’s Ontario Science Centre) – with the goal on increasing visitation to the US.
Madison was in Toronto recently for a special Brand USA event – tied in with Canadian Music Week – in which travel trade personnel got a sneak peek of the film. 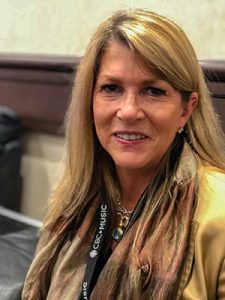 Emotional connection
“Music is one of those things that emotionally connects with people, it stays with them and inspires them to travel,” said Madison. “When people are on a trip, they remember the music that occurred and when they go home and hear that music again, it causes them to re-experience their great travels and also share them with other people.”
US partners – and popular musical destinations – on hand for the event included Austin, Chicago, Portland, North Carolina, Georgia and Myrtle Beach. Attendees were also treated to a reception and performance by Blacc.
Canada is the US’s top international market, with 19.3 million Canadians crossing the border south last year. Madison noted that the National Travel & Tourism Office’s current forecast is a 22% increase in visitation from Canada through 2022. That’s up from an earlier forecast which predicted a 9% increase through 2021.
Speaking with Canadian Travel Press, Madison said the numbers from Canada are looking good, as can be seen by airlines adding seats to the US – with places like California, Nevada and Texas leading the way. She noted that these are all destinations that offer visitors a good variety of experiences.

Different experiences
“In Texas, for example, you’ve got Austin, San Antonio and Dallas – three completely different experiences in one state,” said Madison. “In California you’ve got Northern California, Los Angeles, San Diego and all the small towns in between – all offering very different experiences. It’s part of our value proposition, a diverse range of experiences you can get in one trip.”
She said tourism officials across the US are helping travellers by creating suggested itineraries, “offering a combination of iconic [sites] and the unexpected.”
Challenges faced in attracting the Canadian traveller include the dollar and world wide competition from other destinations.
“There’s big pressure on overall market share,” said Madison.
“We need to find new and better ways to break through the clutter.”
To meet this competition, Brand USA has created more direct channels to the consumer, including GoUSA TV, which had its soft launch in November and is currently available on Amazon Fire TV, Apple TV and Roku. As a connected TVP app similar to Hulu and Netflix, GoUSA TV has more than 2 million views and features on-demand video content about travel experiences in the US.

Listen to the music
Another initiative is Hear The Music. Experience The USA. For this campaign, five emerging artists were asked to interpret the classic American song “Do You Wanna Dance” by Bobby Freeman in ways that reflect the unique culture of their city and to share how their city inspires their music. Digital display and social media drives traffic to the Hear The Music. Experience the USA. landing pages on VisitTheUSA.com . To enhance the power of the campaign, officials partnered with Spotify and customized US city playlists that inspire travellers to explore each city via their favourite songs.
And, there’s Sound Travels: This interactive content hub brings the vibrancy and diversity of the US to life through immersive 3D audio experiences, and inspires potential travellers to explore, plan and book
a trip to the destination. As a part of a multi-year partnership with Expedia, this launch is a pilot program in four markets, including Canada, Australia, Mexico and the United Kingdom. (https://soundtravels.expedia.ca)
For more, visit www.VisitTheUSA.ca/TravelTrade .