Call it a comeback

Canadian arrivals to Jamaica bounce back 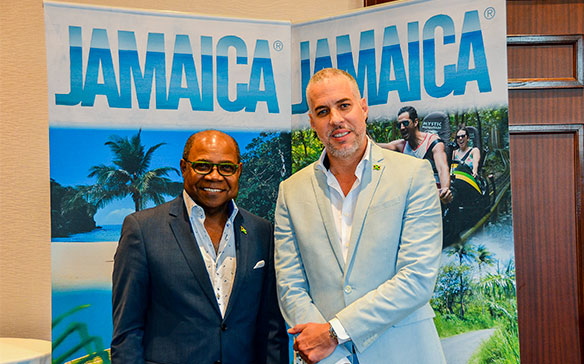 At a time when Jamaica is poised for a record-breaking year – with the Jamaica Tourist Board projecting visitor arrivals to top 4.2 million – the Canadian market is doing its part to help fuel the growth.
“Canada has become the real ogling growth centre for tourism to Jamaica over the last 12 months,” Jamaica’s Minister of Tourism Edmund Bartlett said during a recent visit to Toronto. “In terms of straight growth, there is no market that has grown faster, over the last 12 months, than Canada.”
Reversing a significant decline in Canadian arrivals, which prompted the destination to launch an ambitious plan to target 500,000 annual Canadian visitors by 2021, Bartlett revealed the good news that things are once again looking up from Canada – with arrivals growing by 8%.
“The growth has just begun,” he said, adding that since more than a million Canadians travel to Cuba on a yearly basis, the country’s targets for growth are attainable.
Describing the US and Canada as “the bread and butter” for tourism to Jamaica as its top two source markets, he said continued growth in the island nation hinges on five key pillars – new products, markets, investments, partnerships and renewal of human capital.
In terms of hotel stock, one of the biggest projects coming online is the US$1 billion Sugarcane complex by Karisma Hotels & Resorts, slated to open with more than 5,000 rooms across several resorts, including Margaritaville- and Nickeloadeon-branded properties.
As for new markets, Bartlett noted an influx in tourism from China and India. Meanwhile, he said the addition of new attractions could grow exponentially.
Although Jamaica remained unscathed by this year’s hurricanes, which caused destruction and devastation across many areas in the Caribbean, he announced the topic will now be on the agenda at the upcoming Conference on Jobs and Inclusive Growth: Partner­ships for Sustainable Tourism by the United Nations World Tourism Organization taking place in Montego Bay in November.
“This is a monumental time for Jamaica,” he said, noting the conference is just one of several major events taking place in Jamaica in the coming months.
www.visitjamaica.com