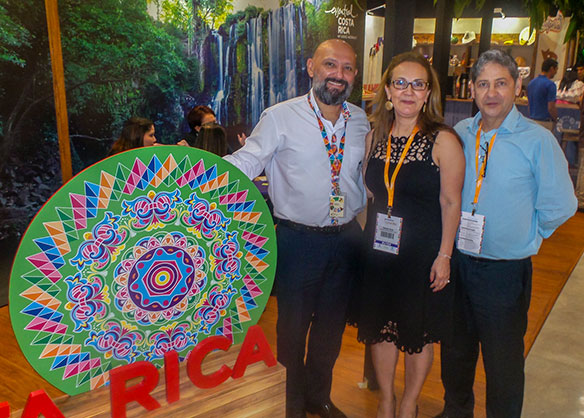 (Photo above: Adalberto Rodriguez of the Costa Rica Tourism Board (l) was on hand to greet Patricia Perez and Camilo Aguilar of Canandes International during Costa Rican tourism show Expotur.)

Costa Rica’s tourism minister says a country that has become synonymous with ecotourism will be careful not to kill the goose that laid the golden egg, as it further develops its vacation offerings in a time of heightened environmental concerns.
Mauricio Ventura told the audience attending the recent Costa Rican tourism show Expotur that his homeland was named the world’s premier nature destination and second adventure destination by the World Economic Forum.
“Clearly, we’ve been positioning ourselves very well,” he told his San Jose audience. “What we want to do is build on that.”
Over a third of Costa Rica’s 51,000 square kilometres is protected from development by both government and private interests, and Costa Rica offers numerous adventure experiences, among them zip-lining, which originated in the Central American country.
But the country has also seen the arrival of large resorts, with the Guanacaste region on its Pacific northwest coast home to properties belonging to major lodging chains and which provide a very different type of vacation than the jungle eco-lodges many associate Costa Rica with.
“Costa Rica still has a lot [of area] to develop,” Ventura said, adding the government is “closely paying attention” to development and working to safeguard green areas.
Ventura said tourist visitations in the 2014 to 2017 period rose 17%, and the government is looking at 6% growth through 2021. That would trail the hoped-for 7% or 8% growth in tourism revenue the government wants to see in the same period.
Government plans call for attracting more tourists during the low season.
Ventura labelled his nation a “multi-destination country,” noting tourists often move from one Costa Rican locale to another during their vacations.
Europeans, in particular, spend long periods in the country, with the average European stay being 17 days, he continued.
Ventura added that Costa Rica is eager to host meetings, and its many spas enable it to cater to those interested in wellness vacations.