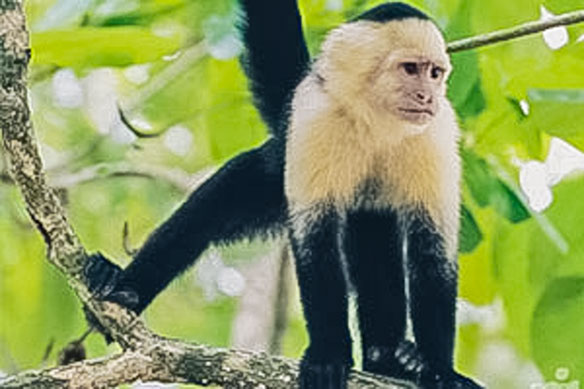 (Photo above: Monkeys are among the many forms of wildlife Costa Rica visitors can spot.)

Those visiting Costa Rica can expect to see the likes of sloths, monkeys and toucans, if they venture into any of the country’s many national parks during their vacation.
But they shouldn’t count on seeing any velociraptors or T-Rexes, says Michel Aranda of Costa Rican tour company Neo Travel.
Aranda, in Toronto recently for a Costa Rica presentation, said blockbuster movie Jurassic Park – which ended with dinosaurs running wild on a Costa Rican island – “was very good publicity [for Costa Rica], but there are none [dinosaurs].”
But tourism authorities add that Costa Rica – a pioneer in ecotourism – is a nature enthusiast’s paradise, with 26% of its land mass protected from development by national parks and other sanctuaries.
Aranda said his homeland has more bird species than Canada and the United States combined and some “500,000 species of flora and fauna.”
“What is the highlight of Costa Rica? Diversity. You’re going to see lots of things,” he said. “Every corner of Costa Rica has a lot of nature.”
Costa Rica even has 100 species of bats, Aranda noted. “If you don’t like mosquitoes, you should love these guys,” he joked of bats, many of which feed on insects.
One reason for Costa Rican diversity is the varied landscapes found in the country, with those landscapes including rain forest and cloud forest. Daniel Chavarria of enchanting-hotels said he’s proud of Costa Rica’s efforts to safeguard its natural side. “We have been pioneers in ecotourism, and many other countries have been following,” he stated.
Costa Rica has all types of tropical life zones, and it’s easy to see wildlife in them, said Chavarria, president of an association made up of hotels, attractions and other components of the tourism trade that promotes Costa Rica, using a cooperative campaign.
Luanna Gonzalez of the Costa Rica Tourism Board said it’s common for those travelling in Costa Rican parks to have to stop for animals. “Manuel Antonio [National Park] is like a zoo, but the animals are free,” she said.
Gonzalez added that her homeland’s Caribbean coast also offers opportunities to spot wildlife. Those opportunities include Tortuguero National Park, which can be explored by its canals.
Whales can be seen off southern Costa Rica’s Pacific coast at certain times of the year.
Gonzalez also said that the northwestern Costa Rica district of Guanacaste has numerous resorts that are luring large numbers of beach tourists.
Gonzalez said Costa Rica is also attracting large numbers of families.
“The most important thing is we’re an all-year-round destination. You can go any month and have great weather,” she stated.
Airlines that link Canada and Costa Rica include Air Canada, WestJet and Sunwing.