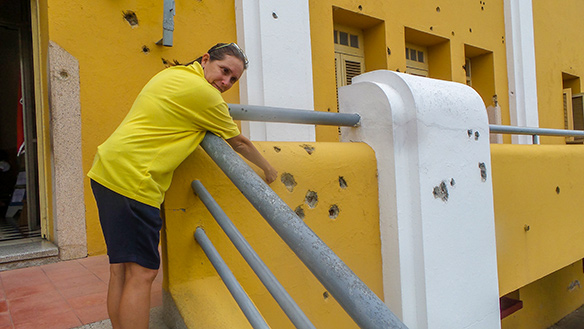 (Photo above: Guide Betsy Olivares Betancourt points to bullet holes in what was the Moncada Barracks.)

Tourism officials say the city of Santiago de Cuba can lay a rightful claim to playing a pivotal role in the Cuban Revolution, with the eastern city being home to the structure that saw the first shots fired in that multi-year guerrilla campaign.
Among Santiago de Cuba attractions is the building that was once called the Moncada Barracks, which housed Cuban soldiers and was the target of a largely failed raid by Fidel Castro and his fellow revolutionaries on July 26, 1953, the first military action Castro and his fellow combatants undertook.
The structure now serves as a school but visitors will still be able to see part of the large building in which numerous bullet holes are still visible, notes Cubatur guide Betsy Olivares Betancourt.
“The most important thing about Santiago de Cuba is the history,” Olivares Betancourt says, adding the city played a role in the Cuban Revolution, Cuba’s War of Independence and is in an area which saw early contact between Cuba’s Aboriginal population and newly arrived Spanish.
She says the the anniversary of the attack is still celebrated in Cuba each year and what was the former barracks is now viewed as “one of the most important buildings in Cuba. If you didn’t come to the Moncada Garrison, you didn’t visit Santiago de Cuba.”
A Santiago de Cuba cemetery has a large tomb that serves as the final resting place for Jose Marti, a name synonymous in Cuba with that country winning independence from Spain in the 19th century.
That same cemetery also has prominent tombstones marking the grave of Compay Segundo of Buena Vista Social Club fame, with Segundo being from the area, and members of the Bacardi family, who created the rum that bears their name today but relocated their distillery to Puerto Rico after the revolution.
What was the Bacardi distillery now produces rum called Santiago de Cuba and Caney, with visitors to the complex able to visit a store called La Barrista, which sells rum, cigars and a host of other Cuban items, and has musicians playing Cuban music.
“I think this [Santiago de Cuba] is the best Cuban rum,” says Olivares Betancourt. “It gets aged in the same barrels [as Bacardi rum once was].”
Tourism officials note that Bacardi’s “rummasters” stayed on in Santiago de Cuba after the Bacardi family left Cuba for good.
The Bacardi family’s legacy is also seen in The Bacardi Museum, which include paintings from Madrid’s famed Prado and a mummy one Bacardi acquired on a visit to Egypt.
Santiago de Cuba has a greater percent of people of African heritage than other Cuban cities and Afro-Cuban music is particularly prevalent there.
But those officials note that other types of music can easily be heard in the city, which is proud of its ties with Segundo. “Everybody comes to see the place where this famous musician is buried,” one official says of his gravesite.