Desire enables cruisers to be as bare as they dare 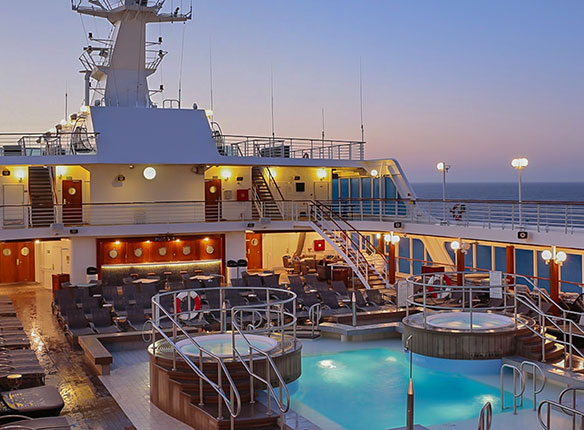 (Photo above: A pool deck is among the features on Desire cruises.)

Mexico’s Original Group is inviting uninhibited sorts to doff some or all of their duds at sea.
The Cancun-based company – best known for its properties on Mexico’s Caribbean coast, some of them clothing-optional, while others allow women to go topless if they choose – now has annual cruises that enable people to shed their clothing and inhibitions alike in some ship areas if they choose.
The Original Group – which bills itself as “the leading expert of adult hospitality” – in April had a Barcelona-Rome sailing offered by its Desire division that it said amounted to a “sensual sanctuary at sea where couples can rejoice in exotic destinations on a journey of fantasy and reverie while being pampered.” Passengers were allowed to be naked in some public areas if they wished.
A similar sailing was held last year, and a Desire sailing from Monte Carlo is planned for next year, while a Greek Islands cruise is slated for 2020. 2020 will also see Original’s Temptation division – which is promoted as “topless-optional” – offer a cruise from Tampa to Cozumel and the Cayman Islands.
The Original sailings provide clothing-optional areas, “sensual staterooms,” “provocative” theme night, “spicy” daytime events and workshops that let passengers “get in touch with their romantic sensual side.” “Sex educators” are on board and “sensual” tantric yoga is provided.
“The market [for those type of cruises] is growing,” Mario Cruz, Original’s concept & product development manager, says of the sailings that attract an “open-minded” clientele. “People are looking for new experiences that have excellent food and a great atmosphere.”
Original hopes to be able to charter a cruise ship for a 2021 sailing that will be able to accommodate up to 5,000 people. That sailing will likely be done under Original’s Temptation division, which bills itself as topless-optional.
Cruz says Original’s sailings are indeed original, with other companies having sailings that have had naked people in public areas of the vessels but that nudity was at times mandatory, while Original leaves the choice up to the individual passenger.
Temptation clients tend to be between 35 and 45, while Desire clients are generally between 40 and 55.
The Original sailings restrict photography to ensure passenger privacy.
Cruz says his company – which will open a Temptation resort in Punta Cana, its first property outside Mexico, in late 2019 – says those considering an Original cruise or a stay at one of its resorts needn’t worry that they will be less attractive than other guests when it comes to being as bare as they dare. “We don’t judge people. I say it’s like going into a Walmart, but they [some of the people] don’t have clothes on.
“And you can keep your clothes on. Just like in a Walmart.”
(www.original-group.com)