Home › Digital Post › Finding out what tourism is all about…

Finding out what tourism is all about… 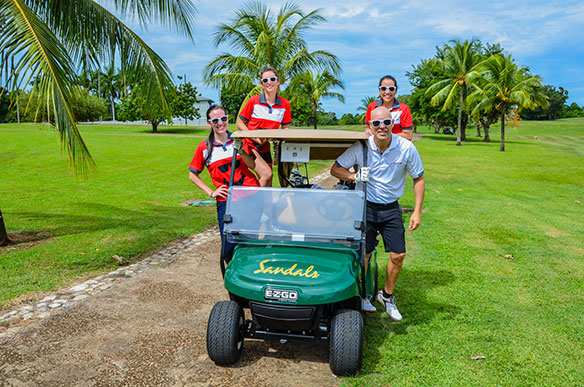 Members of the trade from across Canada brought their A-game to Jamaica last week for the 23rd annual Canadian Travel Industry Golf Tournament presented by Baxter Travel Media and Sandals Resorts.

Held at Sandals Ochi Beach Resort and Sandals Golf & Country Club on Oct. 26–29, the tournament saw teams go head-to-head for two days of golf and skill-testing competitions, fun in the sun, evening functions, special appearances by the likes of Bert and Ernie, and Jamaica’s Minister of Tourism Edmund Bartlett, and not to mention course-side jerk chicken and Red Stripe. 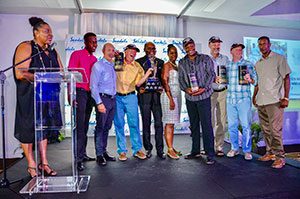 Fantastic time
“The purpose of it really is to firstly showcase Sandals, showcase Jamaica, showcase the golfing product in the Caribbean, but also it’s a chance for industry people to get together and to network and let down their hair for three days and have a fantastic time golfing.”

Barnes-Smith told Canadian Travel Press the success of the Canadian tournament spawned similar events for the US and Latin America trade.

“I think the energy and dynamism of this group was outstanding,” she says. “A lot of people were here for the first time, so they got introduced not only to Jamaica, also to the Sandals and Beaches brands and to the tournament, and those people have promised to come back and bring additional teams next year.”

In attendance for the second time, Tony Rolli, director IT & business innovation at Air Canada Vacations, said members of his team were nominated to take part in the annual tournament by their peers. 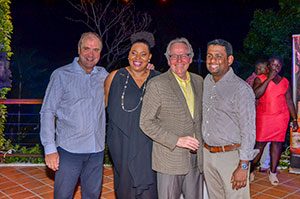 Happy hour at a night event sponsored by Appleton Rum

A nice touch
“It’s a wonderful thing Air Canada Vacations does. Every year the HR department starts a contest to nominate employees who are fitting of dedication to the company, great customer service, so every year members of Air Canada Vacations get nominated to come down for the tournament,” he says. “It’s a real honour to attend. I really enjoyed myself. I was a winner three years ago, and this year I’m accompanying the team, so it really is a pleasure.”

Although she won her place on this year’s ACV team, Mary Tragoulias says she’d pay to attend again next year.

“The ambience is really great, it’s nice to get to know everybody in person, the chemistry is really nice,” she says. “In my group, there are eight of us, it’s nice because we don’t necessarily work with each other every day, so to spend the time with them for three days is great.”

A little incentive
Part of the winning team at the tournament – who earned a three-night stay at Sandal Emerald Bay for the Worldwide Travel Industry Golf Tournament in 2018, as well as airfare courtesy of Air Canada Vacations — Robert Cole, business development manager at Allianz Global Assistance says the experience was an ideal opportunity to further develop relationships with others in the travel and hospitality sector.

“Our team thoroughly enjoyed playing our best together and we had fun too,” he says. “It was a lovely and unexpected surprise to learn that our winning team will go on to represent Canada at the upcoming Sandals world travel event in Exuma. This is an exciting opportunity to continue building relationships, and I’m looking forward to participating.”

Representing Voyzant, closest to the pin winner Babu Nagalingam says Jamaica is a big market for the company, which brings just over 22,000 Canadians to the Caribbean destination every year.

“The tournament was very well organized, the weather was perfect and the hospitality at Sandals was amazing,” he says. “I hope to be lucky enough to attend future tournaments.”

Teammate Michael DeGrace, manager – speciality sales Asia at Air Canada says not only was this his first time playing in the tournament, but it was also his first time staying at a Sandals resort.

“It’s been a great experience, and I’ve got to tell you, it’s exceeded my expectations,” he says. “We’re here because one of our key customers invited us to attend with them, and Jamaica is obviously a very strong market for Air Canada.” 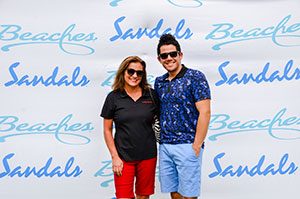 Networking nirvana
As for Colton Chia, director, partnerships at TPI, he’d like to participate again next year for what would be his third time.

“My favourite part of the Baxter, Sandals tournament is seeing familiar faces, meeting some new people and, of course, just getting out on the course in beautiful Jamaica, which I don’t get to do, ever, other than this tournament,” he says. “I was talking about getting out with a couple of our agents next year. I think that would be fun.”

Coming down for the fifth time, Philip Rose, regional director, Canada for the Jamaica Tourist Board, says it’s important for him to attend the annual event.

Also in attendance for the fifth time was Laurie Umscheid, the owner/manager of Vulcan Vacations.
“We really enjoy meeting up with some people in the industry, as well as fellow travel agents to network with,” she says. “It’s a fun weekend with lots to do.” 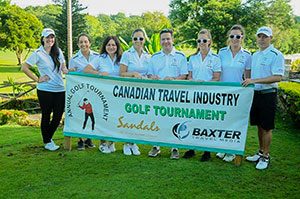 What it’s all about
Travel agent Cathy Matieshin of Artistic Travel says she’s been coming down for the tournament every year since 2006.

“I always enjoy going to meet new travel industry people and to catch up on the ones I’ve seen in past years,” she says. “There aren’t a lot of agents coming out of Western Canada, and I always feel so welcomed by everyone at the tournament.”

Meanwhile, travel agent Pamela Lecky of Mirabel Travel has been playing in the tournament for nearly every year since its inception.

“I come every year,” she says. “God’s will, I’ll be here next year! I enjoy the golf and hanging around.”

For Jamaica’s Minister of Tourism Edmund Bartlett, who has joined the festivities eight times, the tournament epitomizes travel.

“I’ve found it to be lots of fun… I think this is what tourism is about,” he says. “Tourism is about relationships, making people happy, and it’s about maximizing satisfaction.”

The winners at the 23rd annual Canadian Travel Industry Golf Tournament presented by Baxter Travel Media and Sandals Resorts are: 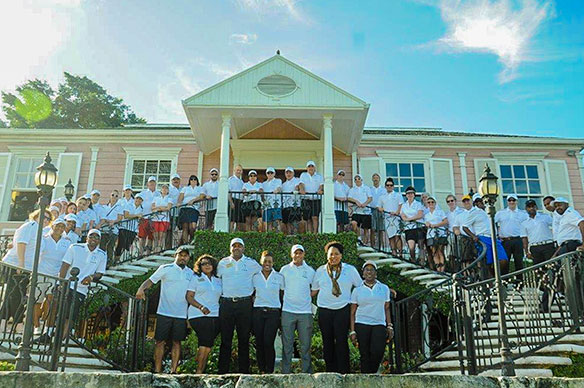