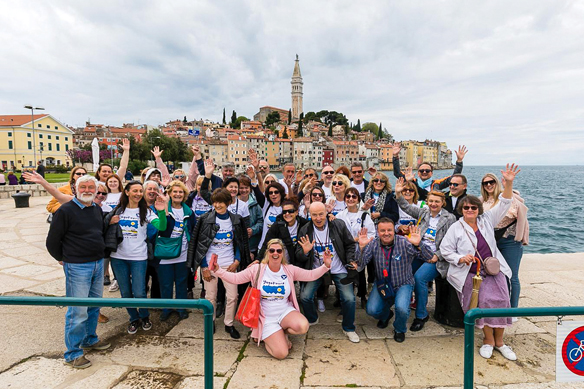 PICTURED above: Former Yugotours employees from over 10 countries gather for a picture during grand reunion in Croatia in early May.

In early May, over 100 former Yugotours staff gathered in the famous resort of Porec, on the Istrian coast of present-day Croatia, for a massive reunion more than two decades after the company closed.

From May 3 to May 6, past staff travelled from Australia, Canada, Germany, Italy, Sweden, Austria, Czech Republic, Serbia, Croatia, and Bosnia-Herzegovin for a four-day, action-packed reunion program.

Highlights on the grand reunion included a cocktail party, a boat trip to Rovinj via the famous Lim Fjord, a gala dinner in elegant Villa Polesini, and much more.

In the 1980s, Yugotours sent close to 500,000 holidaymakers a year from the United Kingdom to the countries of the former Yugoslavia – mainly to present-day Croatia, Slovenia, and Montenegro.

The tour operator was known for its extremely thick and colourful holiday brochure, specialist staff with in-depth knowledge of the former Yugoslavia and great relations with travel agents.

With its head office on Regent Street in London and a busy branch office in Manchester, Yugotours was one of the travel agent’s favourites with regular regional road shows and promotions.

In 1995, however, Yugotours was closed due to the break-up of the former Yugoslavia and the conflict which followed.

The organizers of the reunion were Joanne Purssell and Jill Jackson from the United Kingdom who worked at Yugotours’ head office. As well as, Dragan Djordjevic and Rajko Macura from the former Yugoslavia and who had various roles including enthusiastic holiday representatives.

“So many of us have stayed in touch over all these years, and we have always said we would do this grand reunion,” explained Joanne Purssell.

And Purssell continued: “It has taken serious planning with people coming from far and wide, and we are all delighted to once again be together to talk about the old days; and they really were good days because Yugotours was a fantastic company to work for.”

“Customers who enjoyed Adriatic holidays booked again and again, and travel agents hugely supported the company – there was a fantastic spirit,” she concluded.