Frontiers North gets travellers up close to nature’s wonders 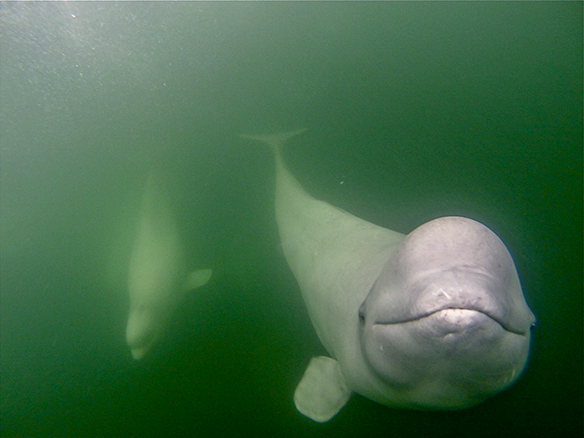 Hitting the right sub-surface notes can enable those visiting the Churchill, Man., area to get up close and personal with some weighty aquatic creatures that some see as having a musical bent.

Winnipeg-based Frontiers North – which sends clients to Churchill, some of whom opt for the famed polar bear tours – is inviting tourists to snorkel near beluga whales on Belugas, Bears and Blooms tours offered from early July through August.

The tours place clients in Zodiac rafts that enter the estuary of the Churchill River, which empties into Hudson Bay. Participants can stay in the Zodiacs, viewing belugas from the craft, or don wet suits and enter the water, coming face to almost ghostly white face with the large, but harmless belugas.

“Beluga whales are very inquisitive creatures,” reports Frontiers North’s Brandi Hayberg, who spent two hours in the water near the mammals. “Unlike other whale-watching tours that have to seek out whales, it’s very common in the Churchill River that belugas will approach our boats, coming within a few feet of our Zodiacs to get a closer look at the guests.”

Water is at times murky, but can be clear at other times.

Some 57,000 belugas are believed to summer in Hudson Bay, and many routinely enter rivers that feed into the bay – such as the Churchill – to feed and give birth in the warmer, fresh water.

An interpretive guide will stay in the Zodiac, keeping an eye on swimmers.

“The belugas will often approach snorkellers, not getting quite close enough to touch, but close enough to investigate,” she says. “The guide will tell divers to hum underwater – this attracts the attention of the belugas. Beluga whales are often called the canaries of sea, as they are natural mimics and emit squeaks, pops, whistles, and chirps in order to communicate with other whales around them.”

Belugas can reach 4.2 meters in length and weigh up to 1,400 kilos, but are harmless, feeding on small fish.

Despite the belugas’ curiosity about their temporary neighbors, Hayberg says they won’t allow snorkellers to touch them. Nevertheless, it’s wonderful sharing a waterway with the massive creatures in their own aquatic turf, she says.

“Personally, I was very excited and just so amazed that I got to experience it. It was quite surreal,” she says of being near the “kind of different-looking” creatures.
Meanwhile, Frontiers North’s Belugas, Bears and Blooms program also enables visitors to see colourful summer floral displays in the area, as well as view various birds in an area that sees around 200 species in the summer. Polar bears may also be spotted along the coast, and tour participants may also see such creatures as Arctic and red foxes, and Arctic hares.

Dog-carting excursions through boreal forest are also provided, and the tour features the Churchill Itsanitaq Museum, known for its Inuit and Dene carvings and artifacts.