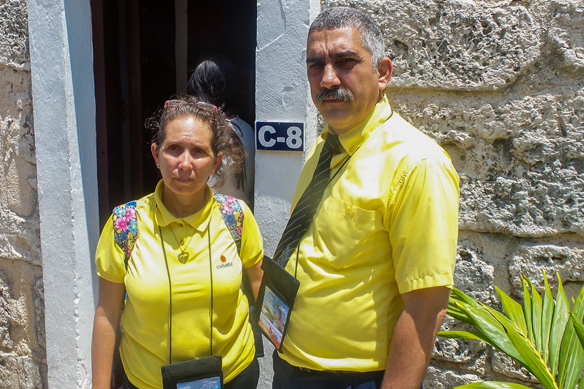 PICTURED above: Havana played host to this year’s FITCuba tourism show, a fitting venue as the city is this year marking its 500th anniversary. Among those on hand for the event were Cubatur guide Betsy Olivares Betancourt seen here with Lazaro Torres Betancourt, Cubatur’s director general.

Also in attendance were: 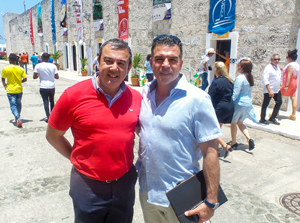 Carrying the flag for Sunwing were Jordi Pelfort (l) and Eric Rodriguez. 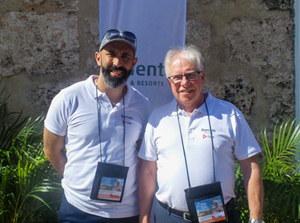 The Barcelo Hotel Group was out in force. Among those on hand representing it were Roberto Marty (l) and Rick McCauley. 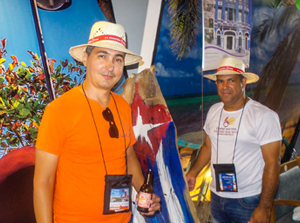 Luis Viamontes Borras (r) was happy to
tell people what an interesting part of the world Camaguey is for visitors. He’s seen here with Miguel Hernandez Fernandez of Gestour Travel & Events.

It would take an awful lot of birthday cake candles to accurately reflect the number of centuries Havana is celebrating this year.

Cuba’s largest city is now marking 500 years of existence, and Cuban tourism authorities are hopeful that ongoing tributes to the civic milestone will help the Latin country set a new record for tourist arrivals.

Cuban tourism minister Manuel Marrero said during the May 6 opening of the country’s annual tourism show FITCuba that Cuba last year welcomed 4.7 million visitors, a 1% increase despite lingering concerns among some travellers in early 2018 that parts of its north coast were still recovering from 2017 hurricane damage.

The country hopes to host 5 million tourists this year, with Marrero telling his Havana audience that Cuba reached the 2 million mark

earlier this year than it did last year, fuelling optimism about a possible record-breaking 2019.
Nov. 16 is the actual date Cuba’s capital turns 500 but Marrero told his FITCuba Havana audience tourists can find tributes to the anniversary throughout this year.

He reported that Cuba saw 850,000 cruise passengers last year and said “cruises will continue to be a supplement” to hotels.

Marrero listed a number of tourism attributes found in his homeland, among them nine UNESCO World Heritage Sites, 14 national parks and seven cities that are 500 or more years old.

He reported that more hotel rooms are in the works for Cuba, and his government is working to eliminate plastics from Cuban tourism, with Cuba joining other Caribbean destinations in undertaking the environmental measure.

Marrero also stated that those visiting his country “can walk the streets safely at any time,” something visitors appreciate.

Cuba’s tourist trade was largely built around its many beaches, but the country has been working to diversify its tourism product, among other things promoting ecotourism in a country Marrero noted was described by Christopher Columbus as “the most beautiful land that human eyes have ever seen.”

Meanwhile, Havana was praised as an “extraordinary place” during the same opening ceremony by Spanish tourism minister Maria Reyes Maroto, who noted it has structures from “the 16th century to modernity…the island has a great cultural heritage.”

Meanwhile, Maroto denounced attempts by the US government to choke Cuba’s economy as “contrary to international law” and said Cuba can “count on the support of Spain,” as it resists the American moves.