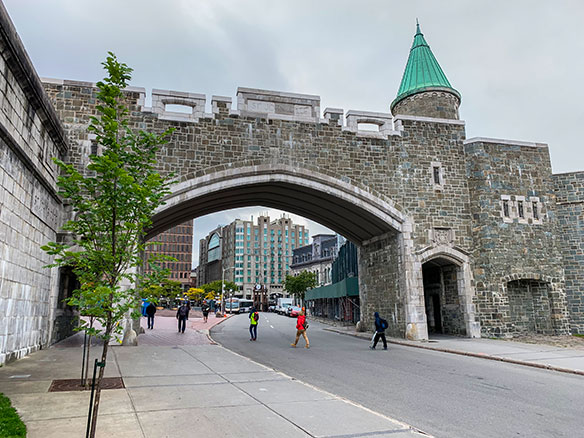 Quebec City’s Le Monastere des Augustines isn’t the sort of place where people would go to perfect the art of small talk while having breakfast.

But it is great for those eager to enjoy the sounds of silence as they break bread at the hotel’s morning buffet, where guests are politely asked not to talk while eating, a throwback to the lifestyles of the cloistered nuns who once called the hotel home and didn’t speak during breakfast. (Guests are welcome to speak during lunch and dinner. As well, the hotel can place groups in private rooms in which they can speak at will during breakfast.)

Le Monastere des Augustines occupies the historic wings of the Hotel-Dieu de Quebec monastery, a 17th-century structure that was the birthplace of the first North American hospital north of Mexico.

The Augustinian Sisters arrived in what was then New France in the same century and are credited with laying the foundation for Quebec’s current healthcare system, founding 12 hospitals in total.

A dwindling number of nuns led to the structure becoming a hotel in 2015 but Katie Lepage, Le Monastere des Augustines business development manager, says reminders of its long church-affiliated past are evident, with guests able to opt for one of the fourth floor’s 32 Contemporary rooms or one of the 33 Authentic ones on the third floor. Fourth floor units have queen or king beds, while those on the third floor have single beds, reflecting the spartan lives nuns led.

No rooms have TVs or phones.

Lepage says the hotel – which has a museum that provides guided tours that “recreate the experience of a 17th-century cloistered” nun lifestyle – is unique in that it is a non-profit operation, with money earned turned over to the likes of caregivers.

The hotel – which offers morning and evening Catholic masses but welcomes people of all faiths and those who have no interest in religion – is still home to 10 elderly nuns who wear their traditional outfits and, unlike some of their predecessors of long ago, can freely speak with outsiders who visit the structure those nuns continue to call home.

Lepage says not speaking to companions or servers during breakfast isn’t the norm for those staying in a hotel but guests can communicate with servers by nodding or smiling and those servers may whisper to them.

And she adds that diners tend to quickly appreciate the peaceful and relaxed conversation-free ambiance of the day’s first meal.