Industry steps up to support Australia

ʻWe felt compelled to reach out and helpʼ 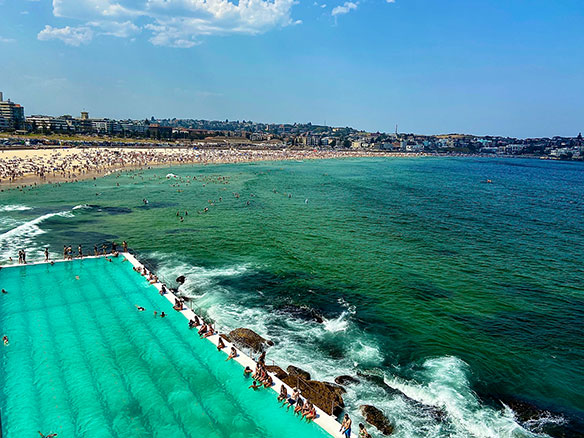 (Photo above: Sydney enjoyed clear skies this past weekend. Fires outside cities have at times created hazes in urban areas.  Photo courtesy/ GOWAY)

Tourists shouldn’t shun Australian vacations because of the bushfires that have ravaged parts of the country, says a tour operator that has long been sending people to the country.

Shirley Rourke of Goway Travel’s South Pacific department says it indeed remains possible for tourists to have a fulfilling Australian vacation despite the “tragic and heartbreaking” fire situation that’s been blamed for over 20 deaths and the loss of over 1,600 homes. There’s also speculation that millions of wild animals may have died.

The fires have generated international attention, with Rourke acknowledging they’ve been damaging to Australian tourism. But she adds there are many parts of the sprawling country that aren’t affected.

“Australia is still open for business,” she said. “In fact, there is no better way to support Australia than to rally around its local communities and visit it in its time of need.”

Those visiting the country now “should be prepared to perhaps modify their itinerary” if they’re near a fire zone but “there are many beautiful regions of Australia are are unaffected,” Rourke added.

Global Affairs Canada said as of Jan. 9 that those visiting Australia should “exercise normal precautions” but warned of possible poor air quality in parts of the country because of smoke and cautioned travellers may encounter disruptions to the likes of transportation systems and power. It also says visitors should be prepared to change their itineraries and leave an area suddenly.

Rourke said Goway – which has a Sydney office and local partners in Australia – is continually monitoring the situation and is committed to “ensuring the well-being of our travellers…We have been working with clients helping them to understand where they are travelling in perspective to the affected areas and making any necessary adjustments.”

Rourke said tourists should now avoid some areas in New South Wales, Victoria and South Australia. However, some parts of the country that did see fires have since reopened to tourism, with tours in New South Wales’ Blue Mountains again underway and Kangaroo Island – popular with visitors because of its wildlife – continuing to welcome visitors in unaffected towns on the eastern part of the island.

Intrepid Travel spokeswoman Andrina Sanchez said that tour operator – actually based in Australia – told Canadian Travel Press that its program in the country is continuing largely without interuption.

“Our operational team confirmed we currently sell over 50-plus tours across Australia, and we have been impacted in three states (New South Wales, South Australia and Queensland), most notably in Kangaroo Island where just over a third of the island has been devastated,” she said.

“All our customers and staff are safe and accounted for, and we’ve been lucky to have had fairly minimal disruption as most of the places we travel to are unaffected. Intrepid believes tourism is pertinent for the Australian economy and will play a major part in rebuilding what’s been lost so we must encourage people to continue to travel to this beautiful place once the fires subside.

“The safety of our customers is our first priority, and we anticipate further cancellations. We are monitoring the situation closely and updating our safety page regularly for customers and agents.”

A Tourism Australia statement received on Jan. 6 also noted the large size of the country and stated that many of its regions aren’t affected by the fires and “will continue to offer tourists the incredible tourism experiences that our country is known for.

“Australia will continue to be a world-leading and safe tourism destination, whether in unaffected regions or those that will recover from these bushfires in the months and years to come,” the statement continued.

Authorities say it’s too early to determine how damaging the fires will be to Australian tourism.

Meanwhile, Tourism Australia is suggesting that those heading to the country “seek the most up-to-date information” before they leave home and update themselves about any changing conditions while there.

Fire warning are available through the country’s Bureau of Meteorology’s bom.gov.au website. Visitor Information centres in the country can also provide updates, the tourism promotion body pointed out.

The tour operator also praised the “fearless efforts” of those who are battling the blazes and expressed sympathy for those impacted by them.

Meanwhile, firefighting efforts in New South Wales has gotten a boost from The Travel Corporation, which donated US$100,000 to the New South Wales Rural Fire Service. That service is at the forefront of battling blazes in the state.

“On behalf of TTC, our hearts go out to the devastating loss of life, property, wildlife and nature from the bushfire tragedy. A huge appreciation goes out to the outstanding efforts of the NSW Rural Fire Service – the danger they put themselves in on a daily basis to protect the community and its surrounding area is heroic,” TTC CEO Brett Tollman said.

“We felt compelled to reach out and help, so it’s an absolute privilege to contribute to their commitment, hence our December donation of $100,000 to the NSW Rural Fire Service. Funds go towards technology and necessities such as radios, floodlights, GPSs for the trucks, maintenance, fuel, food and training.”

Intrepid is also providing a helping financial hand to anti-fire efforts. The Intrepid Foundation, the not-for-profit arm of Intrepid Travel, has a new campaign supporting the Red Cross Bushfire Emergency Appeal. Intrepid pledged to match all donations up to AU$100,000, doubling donors’ impact. After massive support from the Intrepid community, the company increased the target to AU$200,000 since the previous goal was hit in the first few days. As 9of Jan. 7, Intrepid has raised over $295,601 with 100% of funds going to the Red Cross. Donations to the Disaster Recovery and Relief Fund will:

“Our hearts go out to all of those impacted by this national crisis and we are compelled to do what we can to support the efforts of the Red Cross on the ground,” said James Thornton, CEO of Intrepid Travel.

“Like the rest of the country, Intrepid stands in solidarity with communities who are being directly affected and we encourage people to donate to the fund so their dollars are matched by us.”