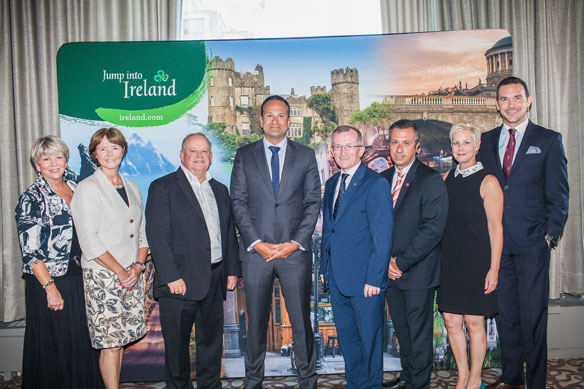 Coinciding with the solar eclipse, Ireland’s newly appointed Taoiseach (Prime Minister) Leo Varadkar met with key travel and tourism officials in Toronto, as part of a three-day visit to Canada at the invitation of Prime Minister Justin Trudeau.
Although Ireland is experiencing a robust period of tourism growth – notably a 21% increase in North American visitors over the first six months of the year, not to mention a 60% growth in overall Canadian arrivals over the past three years – the Irish Prime Minister announced the island destination wouldn’t become complacent and plans to expand its global footprint in the context of trade, tourism and investment. 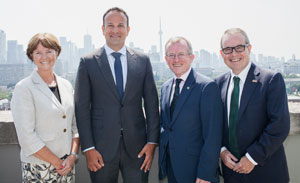 Metcalfe, Varadkar, Gibbons and the Ambassador of Ireland to Canada Jim Kelly.

“Earlier on this morning, I announced the government’s plan to double Ireland’s global footprint around the world by 2025 – part of that’s as a response to Brexit; as a small country, we need to be out there more, have a greater local presence, but more than Brexit, it’s a response to a changing world,” he said. “The world is more globalized, it’s getting smaller and smaller.”
The initiative would see new and bigger embassies and consulates in place around the world, the expansion of Enterprise Ireland and strengthened cultural ties between Ireland and other countries in an effort to encourage more travel and global investment into the Emerald Isle.
“Tourism is also very important economically – it sustains about 250,000 jobs in Ireland, it brings in a lot of revenue, particularly into places where there isn’t much industry or much other employment, it makes it doubly important,” he said.
While the occasion marked Varadkar’s first major international visit in his current position, joined by Tourism Ireland’s CEO Niall Gibbons and Head of North America Alison Metcalfe, he told the group of roughly 35 industry executives on hand for the lunch meeting, which included key supplier partners from Transat, Air Canada Vacations, Collette, Royal Irish Tours, Aer Lingus, and the Globus family of brands, he’s visited Canada many times both in personal and official capacities as Ireland’s Minister of Transport, Tourism and Sport, a post he held from 2011 to 2014.

Fuelling the growth
Coming off a record-breaking year for Canadian visits to Ireland, Tourism Ireland’s CEO told Canadian Travel Press one of the key drivers behind the upswing is a significant boost in lift access between the two nations.
“We’ve seen a big increase in the number of seats into Ireland. We’ve now got year-round service with Aer Lingus, which we didn’t have before, it was always seasonal. WestJet going from Newfoundland, Air Canada rouge going from Vancouver last year for the first time, so these are very significant services,” said Gibbons. “Now you’ve got 33 flights a week, 8,000 seats every single week – that used to be 3,000 seats every week by the way, five or six years ago, so it’s been a big, big increase.”
The growth helped solidify an 80% growth in Canadian holidaymakers to Ireland over the last three years, and saw the Canadian market hit the 200,000 visitor mark for the first time in 2016.
“We’ve seen a huge increase again in the number of people coming from North America – US and Canada – an increase of 21% over the first six months of the year, long-haul markets like the likes of India, China, Australia, increasing also coincidentally by 21%, and mainland European visitors have increased by 6%, so that’s compensated for the reduction of British visitors [as the result of the sterling depreciating against the euro].”
Although Varadkar joked he’d like to attribute Ireland’s steady tourism growth from Canada to his previous post as the Minister of Transport, Tourism and Sport, he credited the work of the Tourism Ireland team, as well as the efforts of those in the travel industry who promote the destination, from tour operators to airlines.
“It has really helped us bring about an environment where tourism is really now booming between Ireland and Canada,” he added.

Impact of Brexit
Despite the uncertainty surrounding Brexit and its ramifications on travel, the Irish Prime Minister expressed his desire for passport free travel to continue within Ireland, noting the sentiment was echoed by representatives in London, Belfast, Dublin and Brussels.
“Whatever happens with Brexit, I’m absolutely convinced one thing that won’t change is the free movement of individuals and the free movement of people, North and South,” he said.
From a tourism and travel perspective, Gibbons told CTP travellers will continue travelling, regardless of the defined borders.
“Obviously in the more medium term there’s some more structural issues around Brexit that we don’t know how it’s going to pan out yet,” he said. “We just talk about hard Brexit, soft Brexit, borders, non-borders. I think the political parties want to see the common travel remain between the UK and Ireland, so that’s good, and there’s obviously some visa arrangement that the UK and Ireland had in place in places like India and China, and we’d like to see them remain as well. I think everyone is very supportive of that.”

The Canadian traveller
In sheer volume, Great Britain is the biggest market for Ireland, but Gibbons said the Canadian market and long-haul markets are important because its travellers represent longer lengths of stays.
“We’ve started to focus more concentration and more investment into markets that yield longer staying, higher-spending visitors,” he says. “That’s part of the success that we’re seeing in this particular market here so we are certainly setting are sights on an increase in Canadian visitors in the coming years.”
Whereas global tourism grew by roughly 4.5% last year, he noted Ireland saw an increase of 11%, and Canadians spent $150 billion in the destination last year. 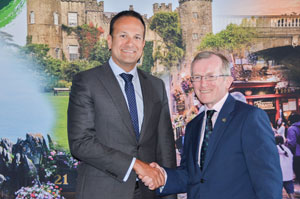 Year-round appeal
Meanwhile, Tourism Ireland is continuing its efforts to showcase the year-round offer of the destination, strengthened by the year-round direct lift access.
“There’s a whole range of things to see and do, and the new experiences on track for people to experience as well,” said Gibbons. “And also achieve some quiet time because you’re coming off peak season, sometimes it’s the best time to see Ireland because don’t have the big crowds that you have in the summer season.”
Another focus will be on promoting festivals and events taking place throughout the year, such as the Dublin Theatre Festival at the end of September, the Belfast Theatre Festival and the Bram Stoker Festival in October.
“It only takes six hours to get there – we think it’s not very close, but it’s only six hours to get down from Toronto,” adds Head of North America, Alison Metcalfe, noting the growth of shorter getaways within the Canadian market. “It’s a world apart and way more brag ability, and we’ve seen that growing trend of shorter stays from the younger traveller, and January is a lot milder than it is here.”
Gibbons reaffirmed Tourism Ireland continued commitment and investment to the travel trade, and said travel agents can expect continued events and educational sessions in the future.
“While the web and technology really does play an increasingly important role in travel and tourism generally, it’s still a people business, and it’s important that we keep in touch and have to keep the travel professionals informed about what’s fresh and what’s new about Ireland,” he said.

Room to grow
Varadkar also took the time to listen to suggestions on how to improve travel and tourism between the two nations. Several tour operators in attendance expressed the need for secondary gateways outside
of Dublin, such as Belfast and Shannon, as well as more options for accommodation.
For his part, Gibbons said plans are underway to increase the total number of rooms in Ireland by over 5,000, with 1,500 being added in Belfast alone, “increasing Northern Ireland’s hotel stock by about 25%.”
Although there are many reasons to visit Ireland, from The Wild Atlantic Way to Ire-land’s Ancient East, Varadkar also cited shooting locations for TV series and film, which he hopes will entice another visit from Trudeau, whom he described as a Star Wars fan. 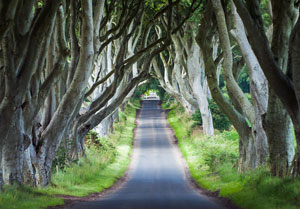 Niall Gibbons, CEO of Tourism Ireland, shares a list of five must-dos for travellers heading to the Emerald Isle.

What about an off-the-beaten path thing to do in Ireland?
The Gobbins Cliff Walk. It’s just reopened recently, built originally in 1902, now completely refurbished, it is one of the most stunning cliff walks on the north coast – that’s one that’s certainly worth checking out.

Be merry in Ireland

Ever wondered what’s the beverage of choice for Ireland’s new Taoiseach, Leo Varadkar, or what Niall Gibbons, the CEO of Tourism Ireland, pairs with a pint of Guinness? Read on to find out:
What’s your favourite Irish drink or dish?
Varadkar: Green Spot Irish Whiskey.
Gibbons: It’s got to be to go to an Irish pub, something like Johnnie Fox’s, the highest pub in Ireland, a pint of Guinness and an Irish stew.