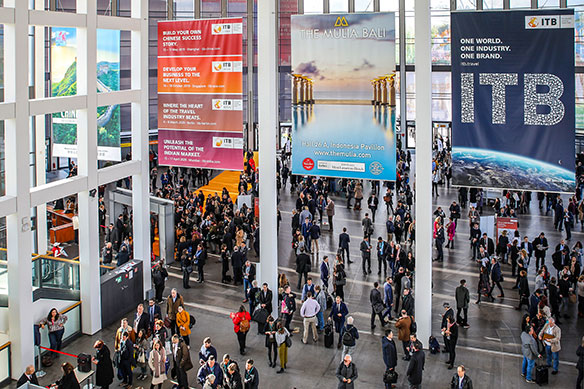 On Feb. 28, the German Ministry of Health officially cancelled the world’s largest tourism trade show, Internationale Tourismus-Börse as a precautionary
measure to contain the spread of COVID-19. Never in 56 years, whether during the Cold War or any other crisis, has the show been cancelled.

What are the implications of ITB, with its 126,000 visitors, being cancelled?

Locally in Berlin, ITB plays a massive role in the economy, being one of two events that have profound positive impacts, from hotel bookings, to restaurants, taxis, customer events, etc., the list of beneficiaries is impressive.

But what is the macro effect of the cancellation of ITB? What does its cancellation say about the current state of the industry as a whole?

Unfortunately, this has a massive knock-on effect upon the entire global travel market. If tourism stakeholders cannot have their largest global meeting in Berlin, what possible credibility can the industry have with consumers to encourage them to continue to travel in light of such unprecedented action? For tourism constituents, this becomes a hypocritical “Do as we say, not as we do.”

Before the plug was pulled on ITB, there was already hemorrhaging of heavy volume bookings from the Chinese, Italian and South Korean markets. Airlines had already suspended the impressive flight capacities in and out of mainland China, and this did not bode well for global tourism participants. Given the historic double-digit growth in outbound tourism from China over the past decade, and the industry having continually shifted resources to deploy in marketing their products to China, the consequences were going to
be grotesque.

For example, in 2018, Canada welcomed 737,000 visitors from China, which doubled the amount of visitors from 2013. Source: Destination Canada. The ramifications of a decrease from China will reverberate around the globe.

The real impact of China, and most other global markets that have to countenance the billions of COVID-19 impressions in the media, will start being felt in the next two weeks. The industry standard 30-day cancellation policies stipulated in group contracts will start coming into play for the beginning of the high season in mid-April. Operators are trying to stave off the impending doom by attempting to re-negotiate these cancellation policies to seven or 14 days out, hoping that the fall in airline seat prices can be capitalized on and that the season may still be salvaged to some extent.

Airlines have been the first to feel the brunt of the economic consequences of COVID-19. According to IATA, the financial loss to airlines could be between $63 billion to $119 billion. Airline shares have plummeted up to 25% and companies such as Lufthansa, Qantas, British Airways and Ryanair have up to 20% of their flights cancelled or planes grounded.

Cruise lines are dealing with tremendous financial pressure, the incidents of quarantining entire ships full of passengers has been an industry nightmare. Canada’s Chief Public Health Official, Dr. Theresa Tam, advised Canadians to avoid “all cruise ship travel” on March 9, 2020. This may take cruise companies years to recover from, and only enticing passengers with unprecedented incentives may lure passengers back.

Given that the spread of COVID-19 continues to grow, especially in Europe, it is impossible to see what the forecast will be for the tourism industry in 2020. The industry as a whole needs to be seen as being proactive in working with all levels of governments around the world to restore consumer confidence in the safety of travel.

The question remains will we be able to address this as an industry before we nosedive into a global recession?

Eric Barber is the senior director, national sales for Realstar Hospitality and a regular contributor to Canadian Travel Press.