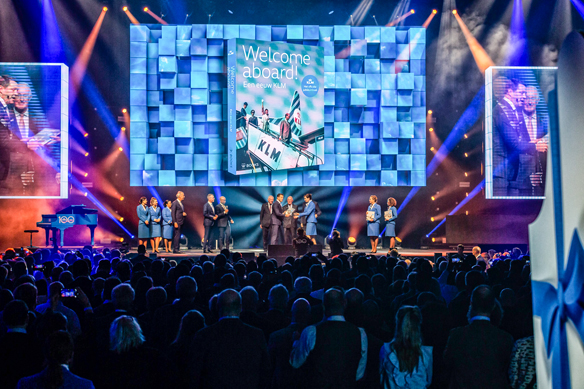 It was a celebration worthy of 100 years in the making as KLM Royal Dutch Airlines marked its 100th anniversary Oct. 7 with a huge celebratory event in Amsterdam.

Canadian Travel Press was on hand during the festivities at Schiphol Airport’s Hangar 10, which served as the backdrop for the party. Guests, including Netherlands Minister of Finance Wopke Hoesktra, customers, partners, Air France-KLM executives and staff, and media, were treated to a “KLM Experience,” featuring an impressive overview of KLM’s past, present and future. 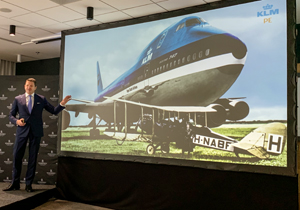 “The fact that we are celebrating our 100th anniversary is not just testimony to a century of successful enterprise, innovation, and commerce, but also to the faith that customers and partners have in KLM. It is an ode to KLM’s aviation pioneers, who literally put civil aviation on the map worldwide. KLM is the oldest international airline still operating under its original name,” noted KLM president and CEO Pieter Elbers.

“We were the first airline to successfully pursue partnerships and alliances, after which many other countries and airlines followed our example. This has brought together hundreds of millions of people around the globe. As Albert Plesman put it: ‘The ocean of the air unites all people.’ We may take pride in our long list of achievements and efforts over the past 100 years. And so we stand – energetic and confident – on the threshold of a new century. Filled with the same pioneering and enterprising spirit, we look forward, with optimism, to taking on the challenges of sustainability and innovation.”

The CEO added that a company can only get to 100 years with a great staff and loyal customers, “and we connect the two.”

And, in keeping with tradition, KLM also marked its anniversary with the presentation of a new – and the 100th – Delftware miniature house, Huis ten Bosch Palace.

Huis ten Bosch Palace in The Hague is the residential palace of King Willem-Alexander and his family. The palace was built in the mid-17th century by order of Prince Frederik Hendrik van Oranje and his wife Amalia van Solms and expanded in the first half of the 18th century by Prince Willem IV. The Oranjezaal is famous for its many monumental paintings. 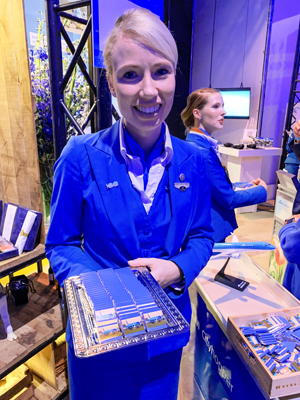 Since the 1950s, KLM has been handing out its own Delft Blue Houses to World Business Class passengers on intercontinental flights. The houses are replicas of special buildings in the Netherlands. From 1994, the number of houses has been synchronous with the age of KLM. Since then, a new copy has been added to the collection every year on or around KLM’s Oct. 7 birthday.

Elbers noted that sustainability is a key factor “in moving forward” through the next 100 years, saying that “nobody wins in a world that loses.”

Fly Responsibly, launched in June, is KLM’s commitment to taking a leading role in creating a more sustainable future for aviation.

In regards to sustainable fuel, KLM launched a project for the first European plant for sustainable fuel, making it the first airline in the world to invest on a large scale. According to officials, sustainable kerosene is a necessary alternative for aviation in order to significantly reduce its CO2 emissions in the short term, in addition to fleet renewal and more efficient flight operations.

And looking towards the future, KLM and TU Delft are working together on a new aircraft – the Flying V, a long-haul energy-efficient aircraft. The proposed V design, where the passenger cabin, cargo deck and fuel tanks are integrated into the wings, has the same wing span and passenger capacity as an Airbus A350, but is projected to use 20% less fuel due to lower weight of the aerodynamic shape. A scale model of the new aircraft, which Airbus has also shown an interest in, is being prepared for flight tests. 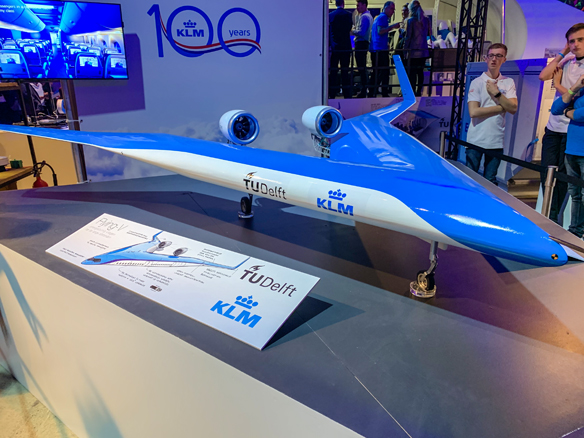