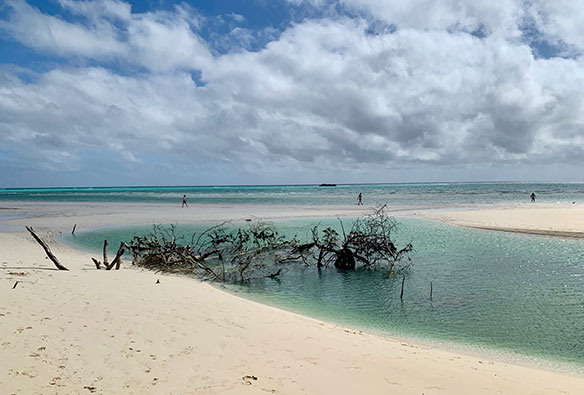 (Photo above: Hurricane Dorian temporarily left a small lake on Gold Rock Beach that can be seen during low tide.)

For Carmel Churchill of the Grand Bahama Island Tourism Board, Hurricane Dorian hit too close to home.

In the wake of the Category 5 storm in early September, nearly 77% of Grand Bahama Island, located 90 km east of Florida, was covered with floodwaters, in some areas
rising much higher 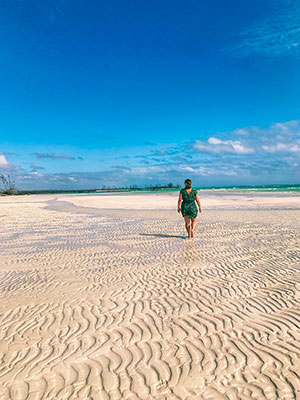 than tree lines and rooftops. Cars were overturned, windows were shattered, roofs were dismantled, and pieces of furniture were scattered across lawns. When the floodwaters receded, it was clear her house and most of her belongings didn’t withstand the damage.

However, Churchill still uses the word “fate” to describe how the 23% of the island that wasn’t directly impacted by the storm, was also the most populated and home to most of the destination’s tourism infrastructure.

“The message I want to get across to persons choosing to visit Grand Bahama Island post-Dorian, is that our resort areas were virtually unscathed, and that they can expect to have a good destination experience,” she tells Canadian Travel Press. “In the words of our Minister of Tourism for The Bahamas, ‘The best way to support The
Bahamas is to visit The Bahamas.’”

Getting the word out that the island is ready to welcome visitors is also key for Steven Johnson, who relocated to Grand Bahama in October to take on the role of General Manager of Tourism on Grand Bahama Island for The Bahamas Ministry of Tourism & Aviation.

Immediately after the storm, The Bahamas was focused on spreading the news that only two of its most northern islands, Grand Bahama and The Abacos, suffered directly from the hurricane with its “14 Islands Of The Bahamas Are Ready To Welcome Visitors With Open Arms” campaign. 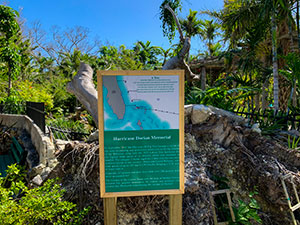 A Hurricane Dorian Memorial was erected in The Garden of Groves next to a 50-year-old fig tree that was uprooted during the storm. Despite being knocked over, new plant life is sprouting on the tree.

Since then, Grand Bahama continues to rebound quickly and even some parts of The Abacos are recovering.

“The most important thing is to let people know that we’re open for business because for a while when we had the 14 island message, we really had to put Grand Bahama on hold until we got back to normal,” says Johnson, a familiar figure in the Canadian market from his tenure in Canada, including most recently as the Senior Manager for Business Development at the Bahamas Tourist Office in Toronto. “We just want to let them know that we’re open, we have a variety of hotels, a variety of activities, and there are a number of specials for agents who want to come down today.”

Prior to Hurricane Dorian, Grand Bahama Island had a total of 1,625 rooms in stock ranging from boutique hotels to all-inclusive resorts and timeshares.

Its cruise port is again operating at 100%, tours and attractions are up to 85% restored and air service is back to 75%. 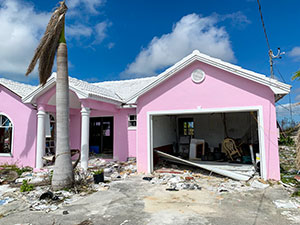 Some residential areas are still recovering from the damage, but many homeowners and locals insist the best way to help the destination rebound is by continuing to visit.

“Our tourism product started coming back on stream as more and more visitors were able to hop on a flight or board a cruise or ferry,”
says Churchill. “Starting in mid-September, we received weekly updates from our hotel partners confirming that they were open for business, and tours and excursions likewise returned to normal services with the increased demand.”

Sunwing was one of the first airlines to resume service to the destination with seasonal flights from Toronto and Montreal from Dec. 14, 2019 through April.

“We value Grand Bahama immensely as a destination and welcomed the opportunity to reinstate our flight service this winter,” says Deana Murphy, Vice President of Retail Sales at Sunwing. “Consumer demand is always a key factor when we are appraising whether to increase the number of resort options in any destination. With regards to Grand Bahama, we are already working with a number of key resorts on the island that are consistently popular with our clientele including Viva Wyndham Fortuna Beach, Pelican Bay Hotel and Island Seas Resort. However, our product team is always on the lookout for additional options.”

On Feb. 13, American Airlines returned with service from Miami, a major hub for North American travellers.

After the US, Johnson says Canada remains their largest international market.

“It’s good to see the Canadian visitors here, it’s good to see Sunwing coming here,” he says. “Canadians have always loved The Bahamas. French Canadians came here years ago before they ventured to Nassau. Back in the late 80s, we had 20,000 Canadians going to explore the west side of Grand Bahama at what was then the Jack Tar Village.”

With Royal Caribbean International and Mexico’s ITM set to purchase the Grand Lucayan Resort with plans to transform the hotel, develop a water-based adventure parks and redevelop Freeport Harbour, as well as a $100 million cruise port development by Carnival Cruise Line and speculations of airport upgrades or a new airport in the pipeline, Grand Bahama’s profile is expected to rise in the coming years. 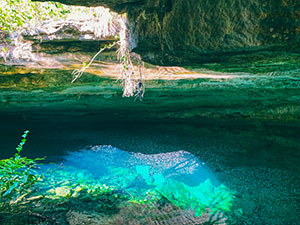 Ben’s Cave in Lucayan National Park is part of one of the longest underwater cave systems in the world.

“This direct tourism investment will also influence improvements to the infrastructure across the island, and I’m sure it will cause more than a trickle-down effect of funds flowing throughout the economy. As the saying goes, ‘a rising tide lifts all boats,’ so businesses directly and indirectly related to tourism will have more funds available for improvements, employee training, expanded services, enhanced technology, and much more,” says Churchhill. “As every touchpoint in the destination elevates, we elevate the tourism product, which, in turn, improves the guest experience. And, as demand grows, the options available to the visitor will increase, offering a more diverse variety of vacation experiences for every individual that chooses to visit Grand Bahama Island.”

Referring to the planned development as a chance to revitalize the island, Johnson says the potential for pre- and post-cruise stays would also be beneficial to tourism, which already represents almost 80% of the GDP on the island.

“Once the [RCI and ITM] deal happens, they’re going to be doing major construction. There are talks of a water park, some additions, that is going to create some excellent opportunities for visitors to come here,” he says.

However, considering all the potential growth, Churchill says travellers don’t need to be concerned about overtourism as Freeport, which represents approximately 40% of Grand Bahama lsland’s land mass, was zoned, developed and has the infrastructure to accommodate a population of 250,000 people.

“Today, the entire island has a little over 51,000 people, which means that we can easily accommodate an instant population growth of 100,000 and still have room to spare,” she says.

THE ROAD TO RECOVERY

“You couldn’t even believe there was a storm here with the mentality of the people out at restaurants, at bars, the nightlife,” he says. “Dorian was a passenger that we don’t want to see back here again.”

However, it’s just a short drive to the still deserted streets full of piles of rubble where Churchill once lived and plans to rebuild again.

“Rescue workers were on jet skis. I’ve never seen a storm like that in my entire life. Lots of areas were flooded and some homes were really destroyed,” recalls Anya Hanna of The Bahamas Ministry of Tourism Grand Bahama office. “My uncle drove up to see his house and drove away because it was so depressing. What do you even do?”

In the aftermath of the hurricane, Churchill says they are re-evaluating the standards for building in the destination and the role of tourism moving forward.

“We are all more mindful of how we rebuild and restore what business as usual looks like in the future,” she says. “As travellers continue to expand and evaluate their impact on the environments they visit, we are becoming more in tune with meeting the needs of these more globally minded citizens, by focusing on more intimate, curated, authentically Bahamian experiences.” 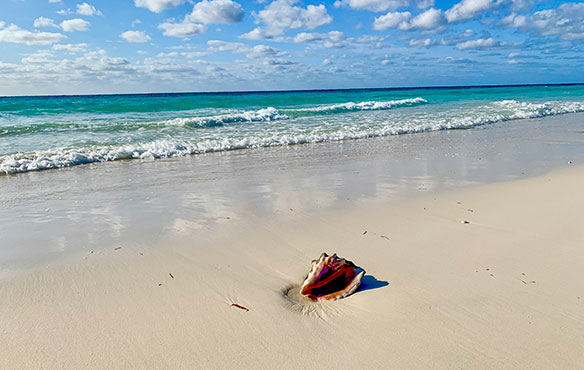