Time to turn things around 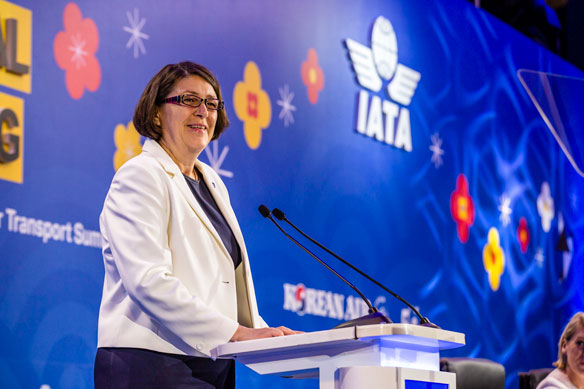 Airline bosses attending IATA’s AGM in Seoul got a rough ride from Violeta Bulc, the European Union’s commissioner for transport, when she got onto the subject of sustainability.

Bulc started out by declaring, “I could stand here all day and talk about the negative externalities of transport in general and the impacts of emissions on our
climate and, therefore, our planet.”

She spared the 290 or so carrier chiefs the day-long diatribe, but pointed out, “We all know that aviation emissions are rising rapidly. Today’s carbon dioxide emissions from air transport are almost twice as high as they were in the 1990s.”

The Slovenian politician added, “We are about to publish the results of a study into the negative externalities of transport, which amount to one trillion euros or 7% of GDP. The study finds that environmental costs, such as climate change, air pollution and noise represent almost 100% of all costs for aviation, amounting to 33 billion euros for the 33 EU airports covered by the study.”

Noting that “the price paid for those travelling by plane roughly covers the infra-structure costs, but not the environmental costs,” Bulc declared; “We cannot continue to generate such high costs for avia-tion or any other transport mode. We need to turn things around, and we need to do it quickly.”

She told AGM delegates, “We owe this to our planet and to future generations; but if that isn’t enough to convince you, we also need more sustainability to ensure public acceptance; and, in the future, I expect the aviation industry’s licence for growth to be linked directly to perceptions of sustainability.”

In his annual report, delivered the same day, IATA CEO Alexandre de Juniac told members, “Along with safety, environment is the other great challenge of our time, but it’s also a fantastic example of what aviation can achieve when stakeholders combine forces to tackle a common problem.”

The DG pointed out that the environmental impact of an individual traveller has been cut in half compared to 1990 and the Carbon Offsetting and Reduction Scheme for International Aviation (CORSIA) will facilitate carbon neutral growth from next year and, by 2050, net emissions will have been halved from 2005 levels.

“This is a great story in progress, but how will we reach its very ambitious end?” asked de Juniac, who said pointedly, “Modernizing air traffic management could cut fuel burn if governments make investments to eliminate inefficiencies.”

According to the former Air France-KLM CEO, the industry’s biggest and most practical opportunity lies with sustainable aviation fuels, and he urged all carriers to follow the lead of some fellow members by making significant forward purchase agreements.

He also stressed that, “Governments also need to act. They should build supportive policies to invigorate the sustainable fuels industry but too many are focused on punitive environment taxes instead.”

“This is climate hypocrisy,” charged the DG. “Putting money into general government coffers does nothing to reduce carbon, and it undermines CORSIA, which delivers real reductions, will generate $40 billion in climate financing by 2035 and was agreed to by governments to be the single global market-based measure.”

“Unchallenged, this phenomenon will grow and spread,” warned de Juniac, who added, “Along with reducing emissions, we must collectively engage and tell our story more effectively and that means articulating a much clearer path towards our 2050 goal.”

He emphasized, “I am not proposing to communicate the climate change problem away. We have targets to meet and we must engage in out-of-the-box thinking to see if there are opportunities to work with governments to do even more.”

During the AGM, member carriers overwhelmingly approved a resolution reconfirming their sustainability commitments and calling on governments to continue working towards full implementation of CORSIA, along with promoting the use of biofuels, new technology and more efficient operations.

De Juniac stated, “It is our duty to protect the planet from the disastrous impacts of climate change. Some say that the answer is to stop or heavily reduce flying, but that would have grave consequences for people, jobs and economies the world over.”

He warned, “It would be a step backwards to an isolated society that is smaller, poorer and constrained.” But he added, “I say let’s work together to make flying sustainable. CO2 is the problem, but we can and are doing something meaningful to reduce it, and we must not keep that a secret.”