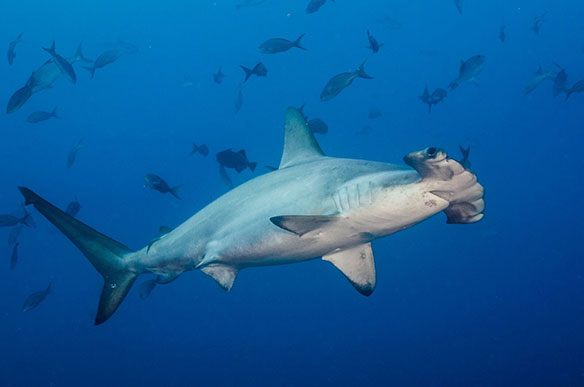 Daniel Berrocal is understandably no fan of the blockbuster movie, Jaws.
Berrocal is with Dive Costa Rica Islands, which sends people on 10-day shipborne packages to Costa Rica’s Cocos Island, where they’ll spend a week diving with rays, whales, dolphins and schools of fish.
And sharks as well.
“It’s really known for its biodiversity,” Berrocal’s colleague Onditz Caparsoro says of the waters surrounding the island, found in a national park.
Among sharks that inhabit those waters are hammerheads, white-tip and Galapagos.
Berrocal says divers shouldn’t be nervous about sharing the waters with sharks.
“They have a bad reputation, but we’ve been diving there 25 years and nothing’s happened,” he says. “They just ignore you. People are afraid of sharks, but there’s not even 10 attacks [worldwide] a year.”
Dive Costa Rica Islands clients are given a briefing before taking to the water on how to interact around the predators.
Divers can generally expect to reach depths of 80 to 100 feet.
It’s recommended that clients have advanced diving certification.
Participants can go on three dives a day.
Cocos Island lies over 500 km off Costa Rica’s Pacific coast, and the trip to it from the mainland takes a day and a half, as does the trip back when the diving concludes.
Divers will eat and sleep on board their vessel. The company has two dive vessels, including the Okeanos Agressor, which can carry 22 passengers, has nine double and one quad rooms, and “all the amenities for a pleasant liveaboard experience.”
Berrocal – who jokes that Jaws was “bad for business” – says divers will end their underwater exploration upbeat after viewing large amounts of marine life and unscathed as well, despite being in ocean water that’s home to creatures not all people are comfortable being around.
“Nobody gets bitten,” he reassures. “Everybody’s happy.”
More information can be found at
divecostaricaislands.com .